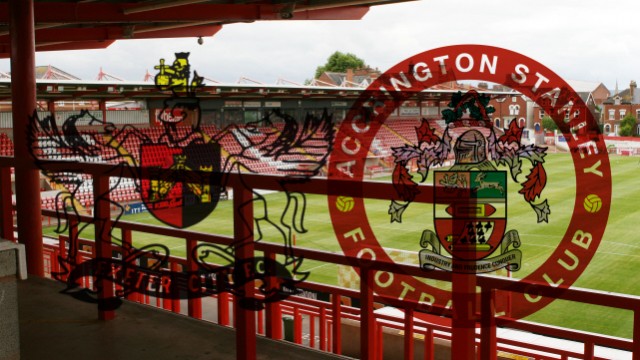 Stanley’s second away trip this week sees the Reds make the long journey to Exeter City.

Exeter City were formed in 1904 following the merger of Exeter United and St Sidwell’s United and entered in to the East Devon League. The Grecians quickly moved in to the Plymouth and District League, before joining the Southern League in 1908.

The club again gained promotion to the Third Division in 1990, before being relegated four years later. The club were then relegated to the Conference in the 2002/03 season.

The Grecians then gained promotion back to the Football League via the play offs in the 2007/08 season, when they beat Cambridge United 1-0 at Wembley. The following season the club made it back to back promotions by winning automatic promotion to League One.

The club were then relegated back to League Two at the end of the 2011/12 season and finished last season in 10th place in the League Two table.

Veteran midfielder Oakley will be key for the Grecians if they are to move away from the relegation zone this season. The 36 year old has so far made 18 appearances for the club this season.

Stanley and Exeter have met on 14 previous occasions, with the Grecians holding the upper hand with eight wins to five for the Reds.

City have won the last three meetings between the sides, including a 3-2 win at the Store First Stadium in December.

Stanley’s last win at St. James Park came in the Conference winning campaign of 05/06 when two goals from Gary Roberts and one from Rommy Boco gave them a 3-1 victory.

The Grecians have had a disappointing season so far, currently sitting in 16th place in the League Two table. They have so far won five, drawn five and lost nine of their 19 home league matches so far this season.

Stanley re unbeaten in their last three games after beating Morecambe and drawing with both Plymouth and Dagenham & Redbridge.

James Beattie’s men are 18th in the League Two table, three points from the top half and six from the relegation places.

Beattie has the same squad to choose from as for the game at Dagenham in midweek, with Laurence Wilson likely to be out for another of couple of weeks with a groin problem.

Young striker Marcus Carver has suffered medial ligament damage in his knee and is likely to remain sidelined for the foreseeable future.

Ticket info can be found by clicking the link – MORE INFO