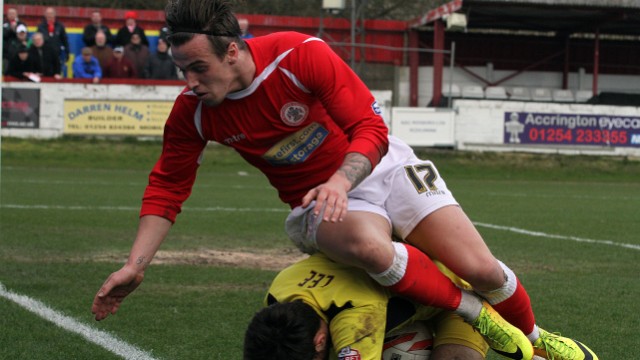 Gray: “We Can Get Result Again”

James Gray is backing Stanley to produce a repeat of last season’s win at Spotland tomorrow and take another stride towards League Two safety.

Just over a year ago the Reds made the short trip to Rochdale and won 3-0 thanks to a spectacular brace from Lee Molyneux and a Rommy Boco strike to climb out of the relegation places.

All three goals came in a thrilling last 20 minutes and Gray feels the current squad can repeat the feat this time around.

“I started there last season and it was unbelievable,” explained the Northern Ireland under 21 international. “It wasn’t a 3-0 game but we would’ve taken that every day of the week! I think we’re more than capable of going there on Saturday and getting a result again.

“I think Keith Hill’s a great manager who has managed higher up the leagues. Rochdale are in those automatic places and they are there for a reason. I think they’re a great team but I have no worries that we’re capable of going there and beating them.

“I think we did them a favour by beating Chesterfield so they’ll be happy with us! I think you saw on Tuesday with Torquay beating Rochdale that anyone can get a result. Rochdale will be looking to bounce back from that and get back to winning ways.”

The trip to Spotland ends a week which has seen Stanley play league leaders Chesterfield and play-off chasing Hartlepool United before a period playing sides lower down the table.

“If you look at the next four weeks of fixtures, I think that they are massive,” said Gray. “I think we’re playing a lot of teams in and around us. I think everyone from about ninth place down is involved in this relegation battle and if you put two or three wins together in a row then your mentality can change completely.”

Gray returned to the starting eleven for the first time since Boxing Day for the Chesterfield game and is now hoping to keep his place for the foreseeable future.

“I’m really pleased to have been starting,” he said. “There’s nothing worse than training all week and then not playing on a Saturday or a Tuesday night. I bided my time and hopefully I can stay in for as long as possible really.

“It’s a bit of a cliché but they do say that it’s easy to get into the team but it’s much harder to stay there. You’ve got to appreciate being in the team when you are there and put your marker down. Hopefully I can do that and the gaffer will keep picking me.

“I think there’s only Michael Liddle out injured at the minute so we have got quite a big squad but I think there’s a lot of quality in that squad too. There are five centre forwards, a lot of good wingers and attacking options so hopefully I can keep going well and stay in the team.”