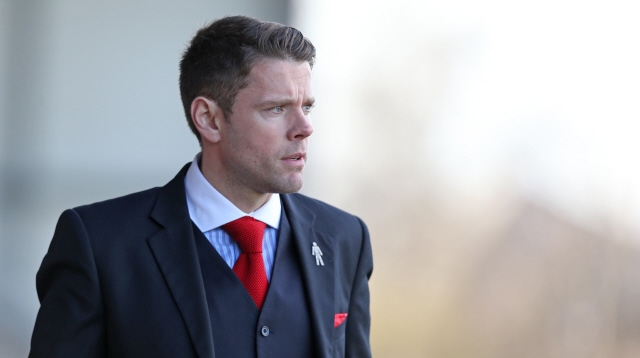 James Beattie has heaped praise on his whole squad ahead of Stanley’s SkyBet League Two match against Hartlepool United.

Due to a combination of injuries and suspensions, the Reds boss made five changes to the side that started in Saturday’s win over league leaders Chesterfield with the likes of James Gray and Will Hatfield coming in.

And, Beattie believes everyone will have to play their part in the remaining 12 league fixtures.

“A couple of lads have been suffering with illness and that’s something you have to watch with lads being in close proximity,” he explained.

“Kal (Naismith), Shay (McCartan) and George (Miller) have been ill but everyone was back together training on Monday.

“We have a lot of games in March and early part of April and everyone will be needed.

“The lads that came in on Saturday did a fantastic job and I think we surprised Chesterfield with the team selection and it’s great to see everyone fighting for the shirt.”

The Reds were also missing the popular Piero Mingoia who suffered a dislocated shoulder in training last week.

And his manager is happy to have his hardworking winger back.

“Our academy physio Tony Tompos did a great job and kept Piero calm and put his shoulder back in,” Beattie said.

“He wanted to rejoin the session but Tony said no, he needed to rest which meant I could join in which was good for me.

“Piero was a bit stiff the next day but should be fine and back in contention for Tuesday night.”

Stanley face a home test against Hartlepool on Tuesday evening, a side they went down 2-1 to in the reverse at Victoria Park in September.

The 3-1 win on Saturday was the Lancashire outfit’s first at the Store First Stadium since November and Beattie says his side must be at their best if they are to make it two wins out of two on home soil.

“They (Hartlepool) had a tremendous run in the middle of the season and we are looking to reverse the result from up there as you never want a team to do the double over you,” he added.

“I was very pleased with Adam’s (Buxton) display at right-back on Saturday and I think everyone who was at the game saw how accomplished he was.

“The league is so tight, if we win on Tuesday we may even move up to 12th but I want us to keep grounded when we win and not get too down if we lose.

“The lads are hungry and ready to play which is an amazing feeling for myself.”