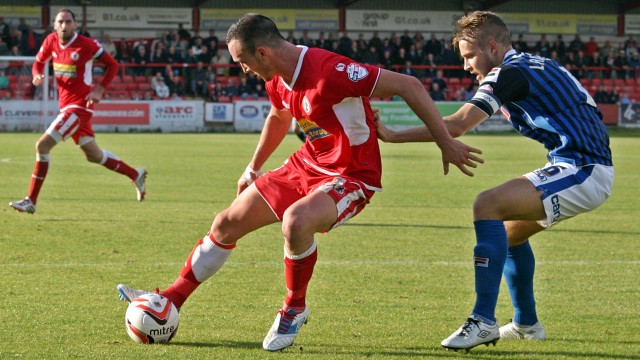 Stanley defender Tom Aldred was delighted to make his 50th consecutive start for the club in the 3-1 home win over Chesterfield.

Signed on a free transfer upon his release from Colchester United in January 2013, Aldred made his debut when he replaced the injured Mark Hughes after 11 minutes during the 3-0 win away at Rochdale a month later and has not missed a minute of action since.

“It’s a brilliant achievement,” he said. “If I had stood here a year ago and said that to you it would have been crazy because I’d had a few different clubs so to come here and put my name into the team and to play as many games consecutively is something I’m really proud of.

“I look after my body and do things to prevent myself from getting injured. I’m happy that I’m fit and able to play.”

The 23 year-old was given the man of the match accolade after the win over the Spireites on Saturday afternoon and he was pleased to get three points against former Stanley managers Paul Cook and Leam Richardson.

“We came into it on the back of two defeats which were unfortunate in differing circumstances but we’ve had to get through that and we’ve dealt with it today.

“We’re really happy to get the result and it’s a massive three points for us,” he added.