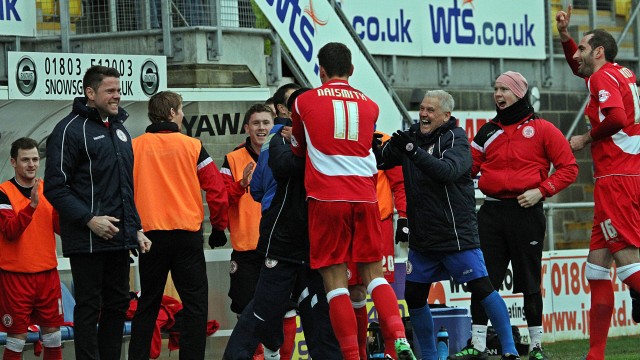 Supersub Kal Naismith came off the bench to score the winner and earn Accrington Stanley a 1-0 victory over Torquay United.

The winger scored within ten minutes of his introduction as a substitute to give the Reds their sixth away win of the campaign and a double over the Gulls.

James Beattie made two changes to his side for the match with Michael Liddle coming in at left back for the suspended Laurence Wilson whilst George Bowerman replaced the unwell Danny Webber.

Youth scholar Max Hazeldine took a place on the bench, alongside Kal Naismith, who recovered from a hip injury in time to be involved with the squad.

The opening stages were cagey, with neither side creating a clear-cut opening. The hosts almost gifted the Reds the lead when Aaron O’Connor flicked Nicky Hunt’s long throw towards his own net but Michael Poke tipped it over the bar.

Conor Wilkinson’s weak effort from 18 yards was easy for Marcus Bettinelli to collect whilst Hunt’s saw a shot from the edge of the box deflected wide as he went in search of his first goal since April 2012.

Peter Murphy had two chances: heading wide from a corner and just failing to connect with Lee Molyneux’s drilled free-kick. Any touch from Stanley’s top goalscorer would have taken him into double figures for the campaign.

Stanley came closest to opening the scoring in the first half when Piero Mingoia’s cross caused havoc in the Torquay penalty area with Bowerman’s header taking the ball into the path of Odejayi, he touched it towards goal but Poke dived backwards and spectacularly scooped the ball away from danger.

The half ended with a goalmouth scramble that saw Bowerman and Luke Joyce have shots blocked before Odejayi’s attempt was deflected wide.

The Gulls started the second half well and had a number of opportunities to take the lead. Joss Labadie headed Lee Mansell’s cross over the bar before seeing a header cleared off the line from a corner.

Stanley remained a threat as Odejayi nodded a corner over Poke’s goal whilst Wilkinson and Jordan Chapell brought comfortable saves from Bettinelli with long-range attempts.

Needing a moment of inspiration to win the game, James Beattie sent on Naismith for Bowerman with just over 20 minutes remaining. It was to be an inspired decision.

The Scot opened the scoring with ten minutes left on the clock. as he picked the ball up 25 yards from goal, nutmegged a defender and then caressed the ball into the bottom corner to give Stanley a priceless lead.

The hosts were sparked into action by the goal with Shamir Goodwin’s effort deflected into the side-netting before Liddle was forced to clear Krystian Pearce’s header off the line from the corner.

However, their efforts were to no avail as the Reds held on for a precious three points that took them eight points clear of the relegation zone.