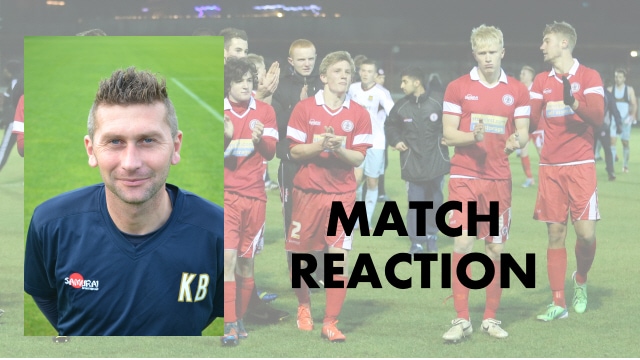 Academy Director Keith Brown was delighted to have progressed to the fifth round of the FA Youth Cup after a 4-1 victory over Bristol City.

After previous results against the likes of Carlisle United, Ilkeston and West Ham United, Brown believes his side can match any of the big guns left in the competition: “There is a good bond between the group and there is such a good belief  – we don’t fear anyone.

“We are absolutely delighted to have got a result against a good side like Bristol City, it just shows how far we have come as a team and a group of players this year.

“A credit to the lads they never stopped working and they stuck to the game plan and it’s no surprise that we got that result because we work hard on our shape and on our game plan on a daily basis.”

However, Brown is adamant that the development of the players is his number one priority and that playing in the big games in front of  a supportive crowd can reap its rewards: “Big nights like this is what it’s all about,” he said.

“If you can handle playing in front of bigger crowds against good opposition like Bristol then it proves that you have a chance to go on and become a professional football which is the ultimate goal.”