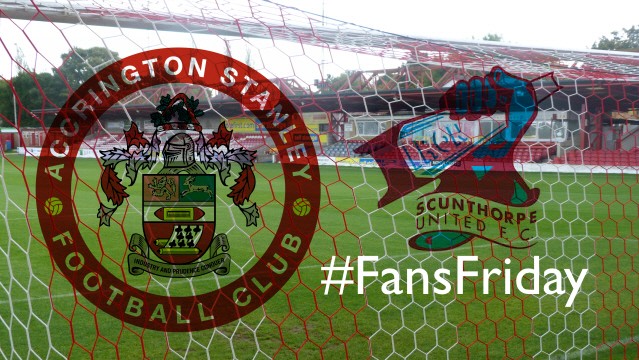 Tomorrow is Fans’ Friday – with Scunthorpe United making the trip to the Store First Stadium.

The club was formed in 1899, before merging with Lindsey United in 1910 and becoming known as Scunthorpe and Lindsey United. They then joined the Midland League in 1912 and won the league for the first time in the 1926-27 season, before lifting the title again in the 1938-39 season.

In 1950 the club was finally accepted into the Football League where they joined Division Three North. The club then won promotion to the Second Division in the 1957-58 season, before finishing fourth in Division Two in the 1961-62 season, the clubs highest ever league finish.

The Iron were then relegated back to Division Three in 1964, before dropping to the Fourth Division in 1968. The Iron were again promoted in 1972, but were relegated the following season.

In 1999 the club reached the Division Three play-off final at Wembley, where they defeated Leyton Orient to gain promotion to Division Two, however the club was relegated the following season.

The Iron have had three England captains play for the club during their careers. Kevin Keegan and Ray Clemence both joined Liverpool directly from the Iron, while former England cricketer Sir Ian Botham also appeared for the club.

Formerly the assistant manager, Russ Wilcox was appointed as full-time manager of the Iron in December 2013.

It came following a successful five game spell in caretaker charge which yielded 13 points from a possible 15.

As a player, Wilcox turned out for Northampton Town, Hull City, Doncaster Rovers, Preston North End and Scunthorpe United in a career that lasted 18 years.

He notably played the majority of his career at Scunthorpe, where he was signed by Brian Laws from Preston North End in 1997.

23-year old Winnall become The Iron’s tenth summer signing when he joined from Wolves in the summer of 2013.

The arrival of the pacey centre forward has turned out to be a shrewd bit of business by former manager Brian Laws, with Winnall currently sitting top of the League Two scoring charts.

The former Shrewsbury and Hereford loan star sits on 15 goals so far this season and the most recent of which came in a 1-1 draw with table topping Chesterfield.

The sides have met on 21 previous occasions and the head-to-head record stands at nine wins each.

The most recent meeting was in November at Glanford Park when George Bowerman and Kayode Odejayi were the Stanley goalscorers in a 2-0 win.

The Iron won on their only previous visit to the Store First Stadium which was a 2011 League Cup tie that ended 2-0 to the visitors.

Stanley are unbeaten in four games after wins over Bristol Rovers and Cheltenham and draws with Newport and Wycombe.

James Beattie’s side are 19th in League Two, four points ahead of the relegation zone and five points from the top half of the table.

The Iron’s last league defeat was against Stanley back in November and they have gone 14 games unbeaten since then.

They’ve drawn their last five matches with the latest a 1-1 draw with league leaders Chesterfield a week ago.

Stanley have no new injury problems for the game and James Beattie will have the same squad to choose from as he had for the trip to Wycombe at the weekend.

Scunthorpe also have no new injury concerns and come into the game able to name the same side that drew with Chesterfield if they wish.

Season ticket holders at ANY Football League or Premier League clubs can benefit from our Fan’s Friday offer, with adults just £10 and all concessions just a fiver. Call the club on 08714341968 to book in advance or bring your season ticket with you and purchase at the ticket office (th0ugh expect to queue!)