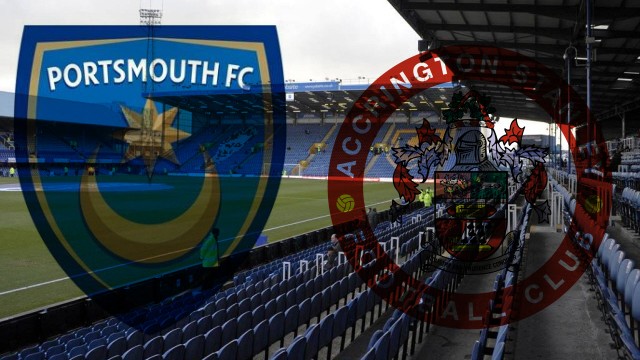 Stanley make the trip to the south coast tomorrow to take on Portsmouth at Fratton Park.

In 1939 the club also won the FA Cup for the first time in their history, defeating Wolverhampton Wanderers 4-1 in the final. Portsmouth’s most successful period in their history came when they won the First Division title in consecutive seasons, between 1948/49 and 1949/50.

The club were then relegated to the Fourth Division for the first time in their history in 1978 before an upturn in the clubs fortunes saw them promoted back to the First Division in 1987.

In 2010 the club was relegated to the Championship, amid serious financial difficulties. The club was again relegated to League One in 2012, before suffering relegation to League Two at the end of last season.

Pompey are currently the largest community-owned football club in England. At least 2000 fans have raised almost £2m and a number of presidents have invested over £50,000 each, raising a further £1.5m.

38 year old Barker took over as Portsmouth manager in December last year. Prior to joining Pompey as manager, Barker had spells at Bury and Crawley Town.

Barker also had a successful playing career, netting over 100 times during his career. Barker appeared for several clubs, including Rotherham United, Mansfield Town and Hartlepool United.

26 year old Diagouraga has recently joined Pompey on loan from Brentford and made his debut for the club in last weekend’s defeat to Scunthorpe United.

Prior to joining Pompey, Diagouraga has spent the majority of his career at Brentford, making over 100 appearances for the club. He has also had spells at Hereford United, Peterborough United and Swindon Town.

The club have always played at Fratton Park since their formation in 1898. The current capacity of Fratton Park is 20,688, and the clubs record attendance is 51,385, which was set against Derby County in the FA Cup sixth round in 1949.

Stanley have never beaten Pompey, though there have only been four previous meetings between the sides.

In August the teams drew 2-2 at the Store First Stadium with Peter Murphy scoring both goals for the Reds and David Connolly netting both for the visitors.

Stanley’s only previous trip to Fratton Park was for an FA Cup tie in 1959 which they lost 4-1.

Richie Barker’s side have won two of their last four matches but were heavily beaten by Scunthorpe at the weekend.

Pompey currently sit in 21st place in the League Two table. They have so far won six, drawn three and lost seven of their 16 home league games this season.

Stanley are unbeaten in four games away from home and haven’t conceded a goal away from the Store First Stadium for over four hours.

James Beattie’s side are a point better off than their hosts and sit 19th in the table, three points behind York City who are eleventh.

Stanley remain without full back Laurence Wilson who serves the second match of his three game ban.

Striker Danny Webber will be assessed after missing the win over Torquay through illness.

Kal Naismith is pushing for a place in the starting line up after netting the winner at Plainmoor.