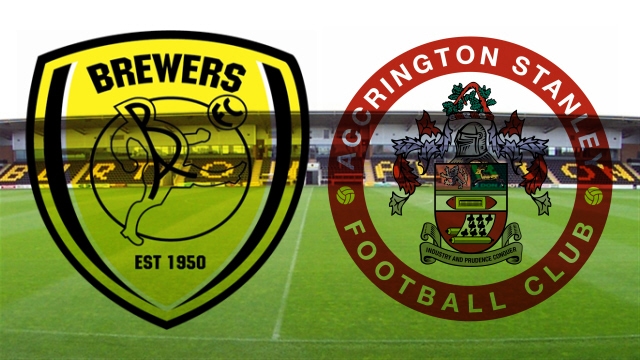 Stanley make the trip to the Pirelli Stadium tomorrow to take on Burton Albion.

Burton Albion were formed in 1950 and began life in the Birmingham and District League.

They spent eight years in the Birmingham League before moving to the Southern League in 1958. During the clubs time in the Southern League, they won promotion to the Premier Division on three occasions, but also suffered relegation the same amount of times.

The Brewers then moved in to the Northern Premier League in 1979, where they spent eight years, before moving back to the Southern League in 1987.

In Gary Rowett’s first full season in charge of the club, the Brewers finished in fourth place in the League Two table last season, losing 5-4 on aggregate to Bradford City in the play offs.

Kee started his career at Leicester City, but left the club without making a league appearance. During his time at Leicester, Kee had a spell on loan at Stanley where he scored nine goals in 37 appearances. He then joined Torquay United, where he netted nine times in 44 appearances, before joining Burton.

The clubs record attendance is 6,192, which was set at the Pirelli Stadium against Oxford United in 2009 in the Blue Square Premier League.

The sides have met 16 times in the Football League and Conference since 2003 with Stanley holding the advantage with eight wins to four for the Brewers.

However the Reds are without a win in the last three meetings, with Burton winning 1-0 thanks to a goal in the 97th minute at the Store First Stadium earlier this season.

Stanley’s last win in the fixture came in January 2012 thanks to a strike from Kevin McIntyre and a Ryan Austin own goal.

The Brewers have had an excellent season so far, currently sitting in 5th place in the League Two table. They have currently won seven, drawn five and lost five of their 17 home league matches so far this season.

Gary Rowett’s side haven’t won in their last four games, since defeating Morecambe 1-0 on the 8th February.

Stanley suffered only their second away defeat since November at Portsmouth in midweek and will be looking to bounce back.

James Beattie’s side sit 22nd in the table, five points from the drop zone but only three from the top half.

Burton have a virtually full strength squad to select from after former Stanley striker Michael Symes returned to fitness.

The Reds remain without Laurence Wilson, who serves the final game of his three match suspension.

Striker Danny Webber is back in contention following illness.