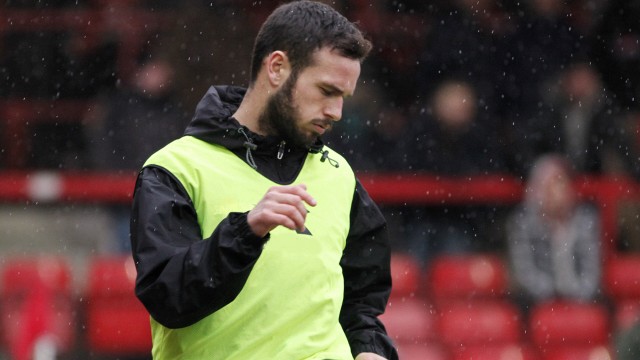 Stanley midfielder Lee Molyneux expects the next week to be one of the club’s most difficult of the season.

The on-loan Crewe man has travelled with the squad to Torquay this morning as the Reds look to continue their impressive away form.

And with further away trips to Portsmouth and Burton to come, last season’s Player of the Year is in no doubt about the size of the task ahead.

“It’s a massive week in terms of having three games in seven days, and this is where the strength of the squad will probably come into play,” he said.

“Some players might not be able to play three games in a week, or there might be an injury. Touch wood there isn’t! But with Laurence (Wilson) getting sent off the other night the squad’s got to be utilised and I think everyone will have a big part to play this week.

“It’s all about pulling together and hopefully getting maximum points.”

Molyneux’s initial month’s loan is coming to an end and he’s seen enough since returning to the Store First Stadium to suggest that the Reds, who sit 20th and five points clear of the bottom two, can stay away from trouble this season.

“I said when I first came back I could see after a few days the squad looked a lot stronger than last year,” he explained. “We’ve got a few more experienced heads in the team now and I think as a whole there is more quality in the team, and a lot more confidence in and around the squad as well than last year.

“Torquay and Northampton are down there now. We’re sort of not looking at how many points we are away from them, we’re looking at the likes of Morecambe and York who are up there (in mid-table). We’re looking at maybe catching them.”