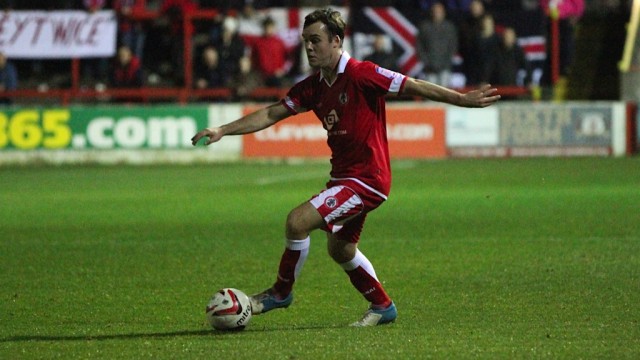 Liddle: Anyone Is Beatable

Stanley defender Michael Liddle believes that the team have nothing to fear heading to Fratton Park tonight.

The Reds have a crunch tie with Portsmouth but the full back insists that the team will not approach the game differently from any other.

“We saw their result on Saturday and anybody’s beatable in this league. They’re a massive club and we’ll respect them,” he said.

“We know they’ve got good players from when we played them at the start of the season. They should probably be doing better than they are but we’re not going to go there expecting a win.”

Picking up results on the road has become Stanley’s specialty this season with six of their nine league victories coming away from the Store First Stadium and Liddle expects the blueprint for recent successes to remain unchanged.

“We need to go with the same attitude as other games away from home: try to kill the tempo, make it uncomfortable for them to play and quieten the crowd down like we have been doing elsewhere.

“Hopefully we can build ourselves into the game, play our football and create some chances. If we keep a clean sheet it only takes one chance for us to come away with a win.”

With Laurence Wilson suspended for three games following his red card against Bury, the left-back was given a chance to impress and did so by helping the Reds to keep a third successive clean sheet away from home which means the team has almost gone five hours without conceding a goal on the road.

“I’m delighted to get back in the team,” he said. “It’s unfortunate what happened to Laurence but it’s an opportunity for me and one I’ve been waiting for. I was desperate to get in and take it.”

A first start since New Year’s Day was tough on the 24 year-old’s body and he is grateful that the squad are staying down on the South Coast ahead of the game.

“It’s a massive help, especially after Saturday’s game. I don’t think anybody could have expected the pitch to be as boggy as it was and it will have taken a lot out of the legs of some of the lads – I know it did from mine!” he laughed.

“It’s nice that we can do things the right way and I think it will benefit us massively.”