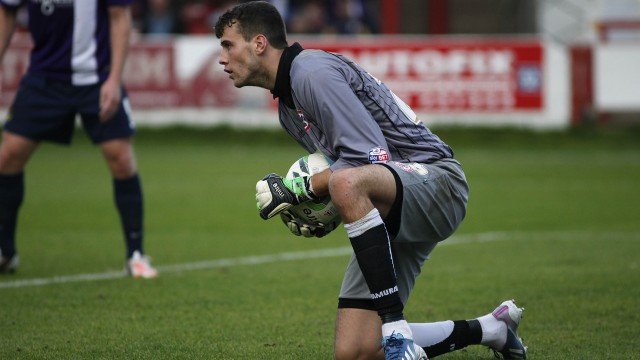 Goalkeeper Marcus Bettinelli says that positivity is the key for Stanley heading into a vital run of games.

The next three games for James Beattie’s side are against sides close to them in the table so it is a big chance to pick up points and move clear of e relegation scrap.

Two of the games are away from home, which may be beneficial given the Reds’ impressive away form but the Fulham loanee cannot put his finger on why Stanley have been so hot on the road but comparatively cold at home.

“It’s just the way it’s gone,” he said. “We know we need to improve on our home form.

“We’ve got a great away record, especially in the last couple of games. We need to start picking points up at home and putting in good performances.”

A heartbreaking last-minute defeat to Scunthorpe on Friday night stalled Stanley’s progress up the table and halted a four-game unbeaten run but Bettinelli says that the squad need to believe in themselves.

“We have to take the positives from the first half and put things right against Bury,” he said.

“With the position we’re in we need to go into games focused and determined to win.

“We’re not out of trouble, everyone in the dressing room knows that.

“We had a tough start to the season but we’ve done really well to get to where we are and we need to carry that on,” he added.

“We’ve done it against the best and we need to take that into every game, starting with Bury.”

It hasn’t been plain sailing throughout the loan spell for the goalkeeper but he is pleased with the invaluable experience of League Two’s rough-and-tumble.

“I’m enjoying every minute of it,” he said. “Even games like tonight: I’m bitterly disappointed, as is the rest of the team, but we’ve got to take positives.

“Personally, it’s another 90 minutes of league football for me.”

Friday was a bizarre evening for the goalkeeper as the manager at his parent club, Rene Meulensteen, was replaced by Felix Magath shortly before the game with Scunthorpe kicked off.

It is Fulham’s third manager of the season and another new man for Bettinelli to impress.

“I definitely wasn’t expecting this at the start of the season!” he laughed.

“I didn’t know about it until half-time when one of the lads said that Rene Meulensteen had been sacked.”

An injury to Dutch international Maarten Stekelenburg over Christmas forced the Cottagers to recall the 21 year-old from his loan spell but he failed to make an appearance before returning to Stanley.

“It was good to be back but I was there sitting on the bench and I was missing playing, missing the lads up here and missing the buzz you get on a matchday.”

He added: “I enjoyed being back at Fulham but I’m a young goalkeeper and I need to be playing games to get experience.”

After signing up for a second loan spell until the end of the season, Bettinelli, who has kept six clean sheets this season, is optimistic that his new manager will keep tabs on his progress in Lancashire.

“I’d like to hope so,” he said. “But my priority is Tuesday night and getting some points on the board for Accrington Stanley.”