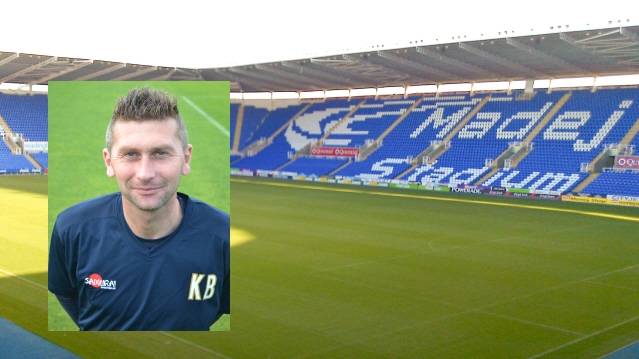 Accrington Stanley may be the surprise package in the last 16 of the FA Youth Cup but their success hasn’t come as a shock to Academy Manager Keith Brown.

The young Reds travel to the Madejski Stadium tonight in the fifth round looking to continue their fine run in the competition.

After knocking out Carlisle, Ilkeston, West Ham and Bristol City it’s another chance to have cup success and Brown believes that shows the quality they’ve got.

“To be honest when I came in at the start of the season I quickly recognised the talent that was in this academy, not just at under 18’s level but throughout,” he said. “That’s credit to the recruitment process and the full time and part time staff. There’s some real home grown talent here.

“We don’t fear any opposition. Of course we show them respect as we do in any game but we won’t do anything differently. We analyse all of our opposition, we know their strengths and weaknesses and work on that but we believe that we can go to Reading, take that belief onto the park and get a result.

“We’re looking forward to it. It’s another big game for us against another big club but I feel it’s important that you play against good teams to test yourself. We’ll certainly be doing that tonight.”

At stake is a quarter final place, with the winners hosting either Watford or Liverpool in the last eight.

Brown feels there’s a quiet confidence in the camp that Stanley will make it through.

“I think the players believe in themselves,” he explained. “We’ve played some top team throughout the competition and we’ve worked hard and earned the right to get a result in each game. As you go along that does build belief and I think the players have that installed in them.

“Every game we’ve played in has been a tough encounter. Tonight will be no different. We’ve looked at Reading and they are good side with some good players but we’re a good side and we’ve got good players and that’s why we’ve made it to this stage of the competition.

“We’ve earned the right to be here and we go into tonight believing that we can do what we are good at and take it to Reading. If we do that, we stand a chance.”