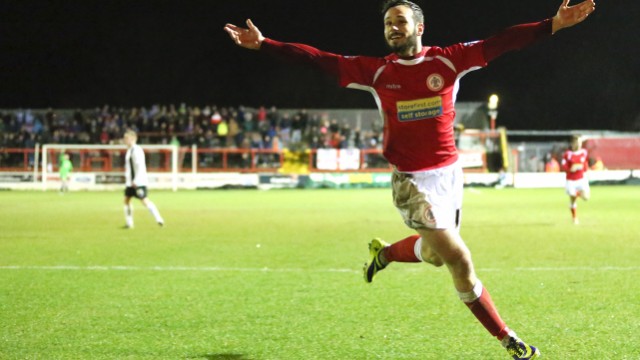 Lee Molyneux is staying at Stanley after his loan from Crewe Alexandra was extended.

The midfielder, who turns 25 today, will now remain at the Store First Stadium for the maximum 93 days allowed for an emergency loan deal.

Last season’s Player of the Year has made five appearances for the club since returning from Gresty Road and is pleased to be extending his stay.

“Confidence-wise it’s brilliant knowing that the manager and the staff are backing me,” he said. “I’ve got a good rapport with the fans and they know that I love being at Accrington, they love me being here and over the next few weeks until the end of the season I hope I can score some more goals and keep improving my performances.

“As I said when I first came back it felt like coming home. I feel settled again now. Playing games is the most important thing for me but especially being at Accy with your mates.

“They’re not just like team-mates or work colleagues, I’ve got genuine friends here.”

Molyneux had to wait to gain a starting place in the side but has been in the first eleven for the last three matches and knows that the competition for places is fierce.

“We’ve had Kal and Piero playing really well and the manager knows that if the team’s doing well he won’t change that much,” he explained.

“I’ve had to bide my time. It’s up to me now to try to keep my place cemented. We’ll all stick together and egg each other on, whoever’s playing in the starting eleven.”