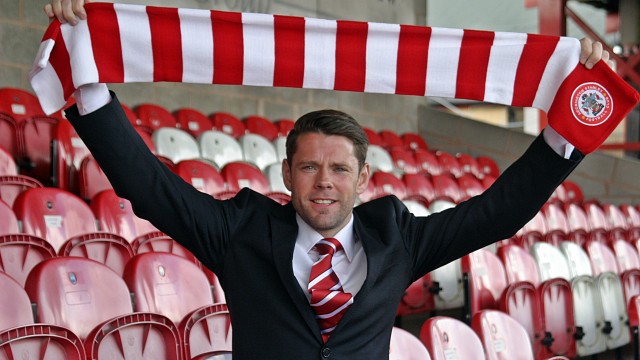 Stanley manager James Beattie is expecting a hostile reception when he takes his side to Portsmouth tomorrow – but won’t be phased by a bit of stick from the home supporters.

Beattie spent six and a half years on the south coast with Pompey’s arch rivals Southampton and scored crucial goals to win a number of derbies during his time at St Mary’s. 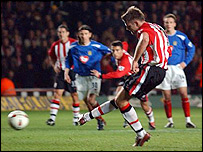 It’s a fact that he doesn’t expect to be lost on the Fratton Park faithful.

“I don’t think they’ll give me stick at all,” he laughed. “I don’t mind it. I had it as a player and I’m sure that I’ll get it as a manager too! I think it’s cos the Portsmouth fans like me so much. It’s a love-hate relationship.”

The Reds head to Hampshire in good form away from home, with Saturday’s win at Torquay a fourth match unbeaten on the road. The manager feels his players deserve credit for that run.

“We’ve just got to carry on doing what we’ve been doing. The position we find ourselves in just a few weeks after not having a win in eleven games is tremendous. The lads deserve huge credit for that. I know they don’t get that credit but I tell them every time that I speak to them that the position they find themselves in now is remarkable.

“It’s their effort that’s done it, their hard work and it’s them believing in what I’m telling them. Now they’re experiencing it for themselves it’s all the better. They just stick at it and dig in when times are tough in the games.”

The players and coaching staff have stayed in the south following the win at Plainmoor and Beattie admitted after picking up the points that his mind immediately turned to Pompey.

“We’ll give them all the information that we regularly do and one of the main things is to get their legs right. We’ve got a hell of a lot of games coming up and the recovery and the rest is going to be as important if not more important than the work they put in.

“I think (staying down south) is the right thing to do. The Chairman’s been kind enough to allow us to do it. I mentioned it to him about eight weeks ago and he nearly fell off his chair but the results have been such that I’ve been able to keep chipping away about it. He’s done great for the lads and the best way we can show our appreciation is by getting results and picking up points. We’ve already made a great start to the week.”