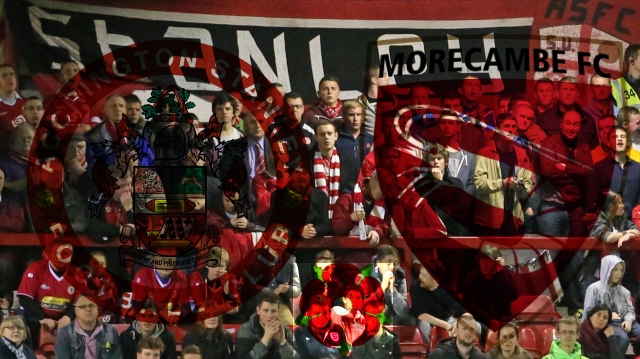 There’s a Lancashire derby at the Store First Stadium tomorrow as Morecambe make the trip to take on Stanley.

The club was formed in 1920 with its base at Woodhill Lane and played in the Lancashire Combination League, before they moved to Rosebery Park in 1921. The grounds name was then changed to Christie Park in 1928 in honour of club president Joseph Barnes Christie.

The club won the FA Trophy for the only time in their history in 1974, beating Dartford 2-1 at Wembley.

The club then finished as runners up in the Northern Premier League in the 1994/95 season, meaning that they would play at Conference level for the first time in their history. The Shrimps were then promoted to the Football League in the 2006/07 season after beating Exeter City 2-1 at Wembley in the play-off final.

The 2009/10 season was the clubs last at Christie Park and they finished the season in fourth place in the table, which is the clubs highest ever league finish. They then lost 7-2 on aggregate to Dagenham and Redbridge in the play offs.

The 37 year old former Shrimps defender is in his first managerial role, having taken over at the club in 2011.

Now 34 Ellison is still one of the most feared goal-scorers at League Two level and on his day is a threat for any defence in the league.

He has scored seven goals so far this campaign and has been renowned for his clinical finishing throughout his career. He lists Stockport, Chester, Hull, Tranmere, Rotherham and Bradford amongst his former clubs.

Ellison is a passionate scouser and is an integral part of Jim Bentley’s squad as they look to form a late surge towards the League Two play-off places.

Accrington Stanley and Morecambe have been regular foes over the last decade in both the Conference and the Reds have an enviable record in that time.

Stanley have won 13 of 20 meetings with the Shrimps picking up just three.

In fact, today’s visitors are yet to beat the Reds in a Football League match, though they did win here at the Store First Stadium in the Johnstone’s Paint Trophy in September 2012.

Earlier this season the game at the Globe Arena looked set for a 1-1 draw after Jack Sampson had cancelled out Danny Webber’s penalty but Peter Murphy proved to be Stanley’s hero, netting a last minute winner to the delight of the visiting contingent.

Stanley are unbeaten in three and have won their last two games, at Bristol Rovers and Cheltenham.

They’ve only lost two of their last ten league games at the Store First Stadium but have only won three in that time.

James Beattie’s side are 17th in League Two, six points from the relegation places and three points behind Plymouth who are 12th.

The Shrimps have drawn their last three games, against Portsmouth, Wycombe and Torquay and last picked up all three points on Boxing Day when they beat Fleetwood 1-0.

They’ve won five league away games so far this season and are tenth in League Two, six points better off than Stanley and eight from the play-off places.

Stanley have no new injuries and barring late deadline day arrivals James Beattie will have the same squad to call upon that won at Bristol Rovers.

After contributing to Peter Murphy’s winning goal at the Memorial Stadium Danny Webber and Lee Molyneux will hope to force their way into the starting line up after coming off the bench in that game.

New Morecambe signing Shaun Beeley could make his debut for the club after signing yesterday following his release by Lancashire neighbours Fleetwood Town.