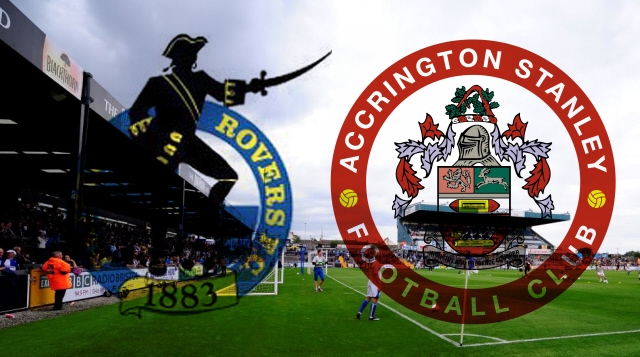 Stanley make the trip to the Memorial Stadium tomorrow to take on Bristol Rovers.

Bristol Rovers were formed in 1883 as the Black Arabs, before becoming known as Eastville Rovers in 1884. The club then became founder members of the Bristol and District League in 1892, which was then renamed the Western League three years later.

In 1897 the club joined the Birmingham and District League and changed their name to Bristol Eastville Rovers. The club then changed its name to Bristol Rovers and joined the Southern League in 1899, winning the league title in 1905.

The club then moved into Division Three of the football league in 1920, and stayed there until winning the league title in the 1952/53 season.

The club then reached the League Two play-off final in the 2006/07 season, where they beat Shrewsbury Town 3-1 at Wembley and in doing so earnt promotion to League One. The club was then relegated back to League Two at the end of the 2010/11 season, with the club finishing in 14th place in the table last season.

62 year old Ward is currently in his second spell as the Pirates manager, after being appointed in December 2012. During his time as a manager, Ward has had spells at several clubs, including York City, Bristol City and Cheltenham Town.

Ward also had a successful playing career with the majority of his career being spent at Lincoln City, where he made over 200 appearances. Ward also had spells at Workington, Watford and Grimsby Town.

The 25 year old signed for the club on a permanent basis in the summer, after a loan spell at the Pirates last season. So far this season O’Toole has made 29 appearances and scored 11 goals in all competitions.

Bristol Rovers moved into their current home the Memorial Stadium in 1996, after spells at seven different grounds, including Twerton Park and Eastville Stadium. The current capacity of the Memorial Stadium is 11,724, with the club’s record attendance being 12,011 which was set against West Bromwich Albion in 2008.

The record attendance that Bristol Rovers have ever achieved was 38,472 at Eastville Stadium, against Preston North End in 1960.

There have been nine previous meetings between the sides and Stanley boast five wins to Bristol Rovers’ three.

The Reds have won the last three meetings, triumphing 1-0 in both games last season and winning 2-1 at the Store First Stadium in October thanks to goals from James Gray and Kal Naismith.

Rovers have had a poor season so far, currently sitting in 18th place in the League Two table. They have won six, drawn four and lost two of their 12 home league matches so far this season.

They beat Newport at the weekend to extend their unbeaten run in League Two to three matches.

Stanley have lost just once in their last six outings though only two of those games, at Mansfield and last weekend at Cheltenham, have been victories.

The Reds have won four of their last six matches away from home.

They sit 20th in League Two, three points outside the relegation places and the same number behind 15th placed York City.

John Ward could stick with an unchanged side after seeing his team win 3-1 against Newport.

Forward Eliot Richards picked up a hamstring problem in that game but should be fit.

James Beattie has no new injury concerns for the game though Marcus Carver, who had been on loan at AFC Fylde, requires shin surgery.

Loan signing Lee Molyneux could make his first appearance since returning to the club from Crewe Alexandra after the weather prevented him from playing Bury at the weekend.