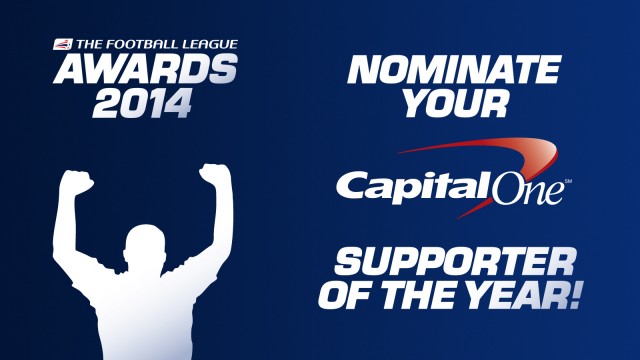 Nominate Your “Supporter of the Year”

The Football League and credit card company Capital One have teamed up to launch a nationwide search to find supporters that have demonstrated extraordinary dedication to their club.

The winner will be announced at the annual Football League Awards 2014 on Sunday 16th March at The Brewery, London, where they will receive the ‘Supporter of the Year’ trophy.

Supporters are asked to nominate fellow fans that have gone above and beyond the call of duty to support their club by submitting suggestions online via Supporter of the Year. Entries will only be submitted once you press the ‘SUBMIT’ bottom at the bottom of the entry form.

Entries must include the nominee’s name, supported club, and details of what makes them a great supporter of their club including why you think they should win the award.

The star-studded evening in March will be the ninth year of the Football League Awards, which recognises and celebrates excellence both on and off the field.

The nominations for the Supporter of The Year Award will be judged by an expert panel, including representatives from The Football League and the media.

A winner for each division will be decided, with the overall Supporter of the Year announced at the event.

If you think you know someone who deserves to be recognised and lift the trophy this year then nominate them now via http://po.st/SotY14

Nominations close at 10am on Monday 4th February 2014.

For more information about the Football League Awards visit www.FLAwards.com.