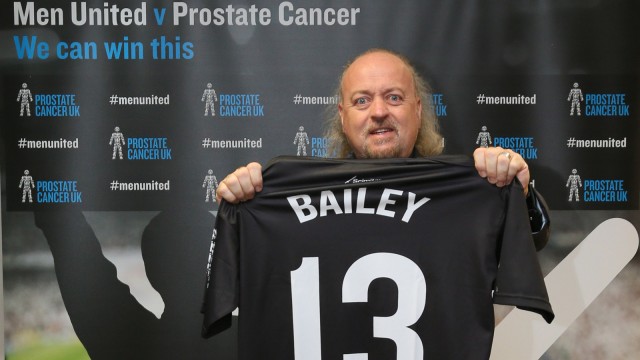 The campaign kicked off last weekend with a national television message. In the 30-second advert, Bailey calls on men from all walks of life to sign for Men United, adding their weight to the new movement to beat the devastating ‘dad’s disease’ once and for all.  The meaty message will be screened more than 6,000 times across numerous platforms, and it is part of a multi-channel, nationwide campaign which is hoped to be the biggest for men’s health the country has ever seen.

To view the advert see http://www.youtube.com/watch?v=7yXCNKGiXoQ.

“We need men to sign for the team in their thousands. Clubs, pubs, individuals – let’s get everyone on the team. It’s easy – just search Men United online and you’re in! We’re determined to make this as massive for blokes as the breast cancer campaign has been for women,” said Bill, whose own father-in-law is one of the 250,000 men in the UK living with the disease.

Top names from sport, the arts and industry – many with personal stories of the destruction inflicted by the disease on a man’s life – have already signed for Men United and now join ‘gaffer’ Bailey in urging the nation’s men to sign up to fight the apathy and neglect surrounding one of the UK’s biggest man killers.

Ex-Crystal Palace and Sheffield Wednesday striker, and regular BBC football pundit Bright, is among the first recruits, stating: “I’m urging all men to sign up to Men United – we should all know the risk we face. As a black man my risk of being diagnosed with prostate cancer is much higher than a white man’s of the same age – it’ll hit one in four black men. That’s quite a penalty. So come on guys, this is a team we all need to be in and the fight against prostate cancer is one we need to win.”

Former England rugby captain Carling is also at the forefront of the campaign and said: “I’ve played in some big matches in my rugby career and faced some fearsome opponents but prostate cancer is a challenge like no other. That’s why I was delighted to become part of Men United. This movement of men aims to raise awareness and start the ball rolling in kicking this killer disease in to touch. 250,000 men in the UK are suffering from prostate cancer – that’s enough to fill Twickenham more than three times.  We all need to stand together to combat this threat. We can win this.

“I know how devastating cancer can be,” he added. “I lost my Mum to this terrible disease. So I’m proud to be an ambassador for Men United and work with Prostate Cancer UK, an organisation that works tirelessly to get this hugely important subject on the agenda, not to mention raising vital funds for the research that will make change. So please join me and sign up to Men United – so we can make men’s health a priority.”

Owen Sharp, Chief Executive at Prostate Cancer UK, is leading the charge to challenge injustice around the disease. He said: “A man in the UK dies each hour from prostate cancer and another is diagnosed every fifteen minutes, yet in one year, England spent seven times more money on burning over-prescribed medicines than it did on prostate cancer research. That’s obscene and our men deserve better.

“Here, prostate cancer survival rates are below the European average, here research into the disease lags a decade behind that for other cancers, and quality of care depends on where you live. It’s a scandal and we are not going to accept it. Men United is a powerful way for men, and the women in their lives, to mobilise against this common enemy. By signing up, you have a place and a voice in a growing movement that’s taking action for men’s health.”

During the integrated television, print and digital campaign, which is running until the end of March, men – and women – are encouraged to go online to search Men United and to get involved by testing their knowledge of the disease with a simple quiz, and signing for the team. They can also pledge their allegiance by proudly wearing the charity’s iconic ‘Man of Men’ pin badge.