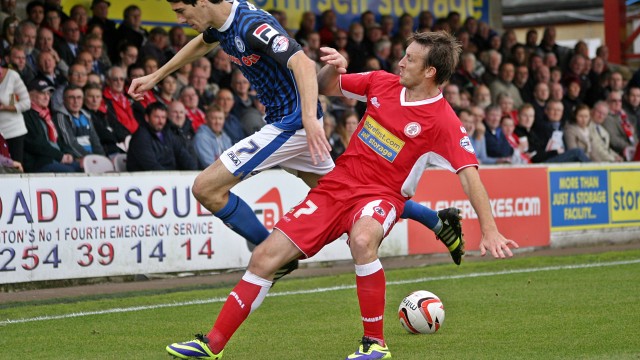 Defender Lee Naylor has left the club after his contract was terminated by mutual consent.

The 33-year-old joined the club on a short term deal in November and has made 14 appearances since.

“I’ve had a few long chats with Lee and the travelling has been really getting to him,” manager James Beattie explained. “He’s had a bit of interest from higher league clubs and we decided to mutually terminate his contract.

“We’re sad to lose Lee with him being an experienced pro but we had a chat and were honest with each other. It’s disappointing to lose a player of his quality but I understand totally where he’s coming from.

“I think anybody who has seen him play this season will have seen that his quality is undeniable. There were always going to be teams watching him. I think it was good for both parties to get Lee playing football again and maybe help him fall back in love with the game again and it was great for us to have his quality for the kind of money that he shouldn’t be on.”

Beattie feels that the likes of Michael Liddle and Laurence Wilson now have a great chance to step into the side for this weekend’s trip to Cheltenham and beyond.

“They must have been disappointed when Lee came in and I would hope that they were,” he said. “They’ve always got behind him and appreciated his quality and now it’s an opportunity for them to stake a claim for the shirt. The competition for places in the squad is healthy but we’re always looking for additions whether the window is open or closed.”

Everyone at the club would like to thank Lee for his service and wish him all the best for the future.