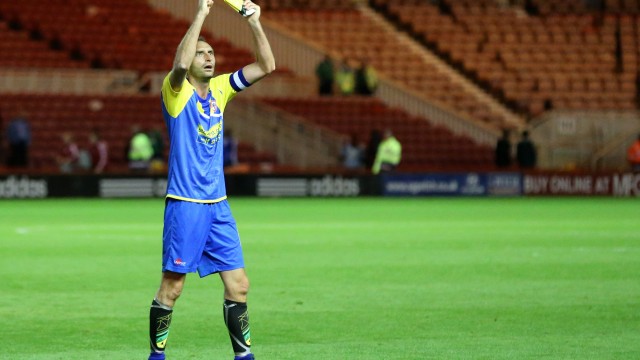 Hunt: We Deserved The Win

Nicky Hunt believes that Stanley’s start was crucial in their victory at Cheltenham yesterday afternoon.

Goals from George Bowerman and Luke Joyce secured all three points and the defender was particularly pleased with the Reds’ first half performance.

“We won every first header, the knockdowns, put the ball into the channel and held it up. It was a perfect away performance from us,” he said.

“Getting the first goal settled everyone down and I think that’s why we got the second. We knew we had something to hold on to and that they would have to come out at us. Getting the second when we did killed the game a little bit.”

Joyce’s goal came less than a minute after Jamie Cureton had hit the bar for the hosts and Hunt says that was the crucial moment in the game: “It was huge mentally. We were going in 2-0 up and they’re going in thinking that it should be 1-1.

“They obviously got a rollocking from their manager and we knew that they would have a 15-20 minute spell in the second half, which they did, and it was a bit of an onslaught but as a whole – goalkeeper, back four, midfield and attackers – we defended really well,” the full-back added.

With Torquay vs Northampton being called off on Saturday morning, Stanley were able to move up to 18th in the League Two table and three points clear of danger. Hunt says that was a big motivator for the players ahead of the game at the Abbey Business Stadium.

“The manager emphasised that in the team meeting at the hotel before the game. It was a great chance for us to move away from the bottom two with that game being postponed and I think we thoroughly deserved the win.

“Cheltenham a top ten club in this league and we’ve shown them how to play football.”