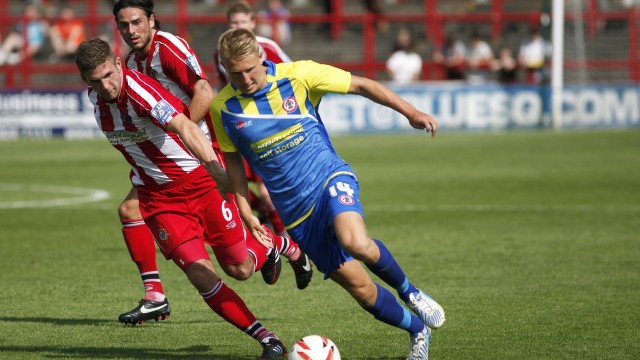 Marcus Carver says he is determined to have a successful second half of the season at Evo-Stik Northern Premier League outfit AFC Fylde.

The 20-year-old Stanley striker is almost a month into his loan at the Coasters and has had a mixed start to his move.

“It’s been tiring as I am currently just coming back from an injury and I feel I’ve not played a game where I’ve been fully fit yet so hopefully I can get 100 percent fit and start scoring,” he said.

“But I’m enjoying being around new people and in a new atmosphere.”

Fylde were the early season favourites to earn promotion to the Skrill North but a poor run of form has seen them drop down to tenth.

But Carver insists the club have the players and the infrastructure to compete this season and in the future.

“Fylde have been out of form so they need to bounce back,” he explained.

“At the moment there’s a bit of a gob smacked feeling at the club as they have lost their last five games in a row.

“The facilities are okay but Fylde’s facility plans for next year look amazing.”

The forward’s injury problems hit again in the Kellamergh Park side’s New Year’s Day defeat at Chorley as he was replaced by Danny Lloyd at half-time and will have a scan to determine the extent of the injury.

Although Saturday’s crucial match against Worksop Town may come too soon for Carver, as we enter 2014, the youngster has a number of resolutions.

“I aspire to get promotion with Fylde and to have earned myself a contract with a club as my contract runs out at the end of the season,” he added.

“I’m just going to play every game like it’s my last and try and get a new contract.”