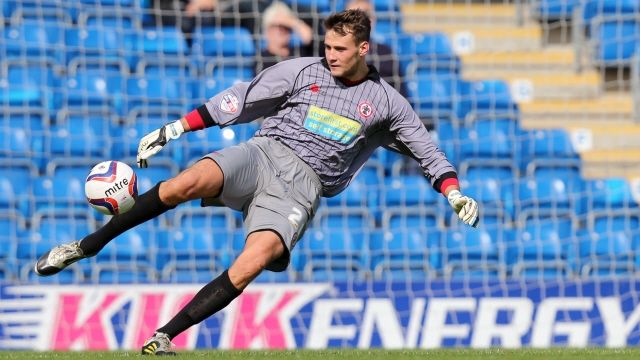 Marcus Bettinelli is hoping Stanley can show the same spirit present in Tuesday’s win over Bristol Rovers when they entertain Morecambe on Saturday.

James Beattie’s side earned a memorable last gasp victory at the Memorial Stadium in difficult conditions and return to the Store First Stadium for this weekend’s League Two clash.

And the 21-year-old goalkeeper believes a repeat performance can see Stanley overcome their Lancashire rivals.

“It was a tough game and the pitch was boggy and my 18 yard box certainly wasn’t the best that I’ve ever played in,” he explained.

“Murph (Peter Murphy) has a knack of popping up in the box at the right time and as a back five that means if we keep a clean sheet then we’ll always have a chance of winning.

“We’re a lot calmer and more controlled as a unit now compared to when I first came in and I think we’re working well together and things are starting to click.”

The club were boosted by the news that Bettinelli extended his loan spell from Fulham this week and he says he is delighted to remain with the Reds until the end of the season.

“This is my first time being out on loan away from home,” he said.

“I do a bit of training at Fulham but largely I’m up here and it’s about experience off the field as much as on it.

“We’re a young side but we’re not just a bunch of individuals who come together to play games, we’re a team who do everything together on and off the pitch.”

Despite winning five of their last seven matches on the road, Stanley have struggled on home soil and Bettinelli admits it’s an area the squad are looking to address.

“We want to improve our home form and we know Morecambe is going to be another tough game for us,” he said.

“We played them earlier on in the season, it was a real test there and luckily for us Murph popped up again!

“We’ll aim for a clean sheet as we always do in every game and hope that people like Kayode (Odejayi), Kal (Naismith) and Piero (Mingoia) can do their bit at the other end and get us a goal; we’re relishing the challenge.”

You can read an in depth interview with Marcus Bettinelli in tomorrow’s matchday programme.