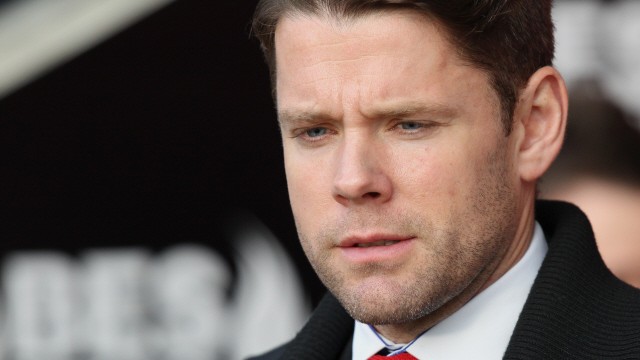 Beattie: “No Complaints About Postponement”

Stanley manager James Beattie had no complaints about this afternoon’s game with Bury being postponed.

Heavy rain from lunchtime left water on the surface of the pitch and referee Kevin Wright elected to call the game off at around 2:15pm.

“I believe the right decision was made,” said Beattie. “The referee was asking for input from myself and (Bury manager) Dave (Flitcroft) and there was standing water on the pitch which is very unusual for this pitch. There was more forecast rain and it wasn’t a case of the water being in just one place it was all over the pitch.

“You could see that from the demonstrations of the ball rolling. We didn’t want a game to be won on a mistake because it’s the referee we would’ve been going to if that happened. I believe, as did Dave, that the referee made the right decision.

“The pitch was magnificent when I arrived this morning and a lot of games have been called off in this area recently when our pitch has stood up to the weather. The deluge that came down between about 1230 and 115 put paid to the game.

“I think the weather’s becoming increasingly severe and that downpour was just something out of a film. The pitch succumbed to the water that came down and there’s not a lot we can do about the weather.

“Our focus now turns to getting the boys out training and preparing for Tuesday night’s game.

“The referee initially got us out at around ten to two and we all agreed to give it 20 minutes to see if the water would drain. It didn’t and the brighter weather that seemed to be coming was now dark clouds with more rain on the way.

“The referee took the decision, with the blessing of Dave and myself, to call the game off.”