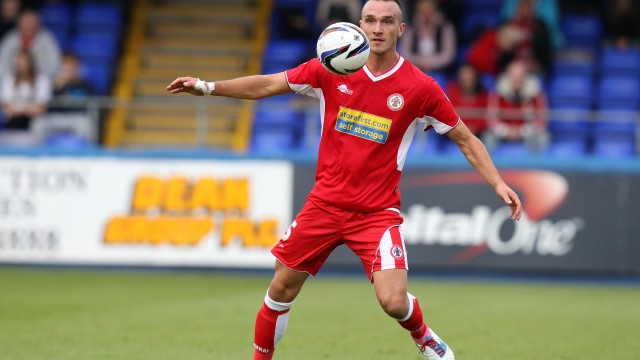 Stanley defender Tom Aldred is determined to help his side tighten up at the back and return to winning ways this weekend at Cheltenham Town.

The Reds conceded three goals against both Fleetwood and Newport in their last two outings but the centre back believes that their performances have merited more than the points return in recent weeks.

“We’re disappointed to have not collected more points from the Christmas and New Year period,” he said. “We had the two home games that we drew and then Saturday’s game where we just got another point. I think when you look at it we could have got at least seven points from those games.

“We scored goals against Newport (on Saturday) but were so disappointed with the goals that we conceded. They were cheap goals and the first one summed it up, a free kick that just went through us and went in.

“From a defensive point of view it’s really frustrating because in the time that I’ve been here we’ve never really conceded lots of goals. It’s not been part of our DNA. We’ve looked at that and it’s something that we want to put right. As soon as we start getting clean sheets again we’ll start picking up the points.

“It’s a collective effort. We’ve got a good squad and it’s important that all the lads are in it together and we can come out the other side.”

Cheltenham are mid-table in League Two and six points from the play-off places but after two straight defeats will be keen to return to winning ways. Aldred feels that Stanley have an extra incentive to prevent them getting their wish.

“This is a massive game for us and a chance to get back onto a winning trail,” he explained. “They beat us 1-0 at home earlier in the season. That was when we were going through a really bad run and they scored from a set piece. I think that we can go there and win this time to put that right.

“That game and the one against Burton have stayed with us so now we’ve got a chance to try to make amends.”