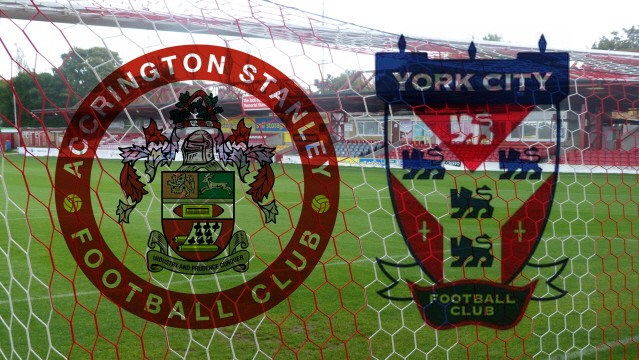 York City are the visitors as festive football comes to the Store First Stadium tomorrow afternoon.

York City were formed in 1908 and spent their early years in the Midland League. After the First World War they were accepted into the Football League and began life in the Third Division North, where they would stay until 1959.

Between times the Minstermen made headlines in the FA Cup, reaching the semi-finals in 1955 and losing to eventual winners Newcastle United.

1959 saw their first promotion, to the Third Division, and they were then promoted to the Second Division 15 years later but found themselves bottom of the Fourth Division and needing to apply for re-election by the end of the 1970’s.

They won that division in 1984 and went up to the Second Division nine years later before reaching the play-offs the following year.

The club’s run in the Football League ended in 2004 when they were relegated to the Conference but after a number of play-off disappointments they returned with a Wembley win in 2012.

In 1995 York beat a Manchester United side destined to go on and win the Premier League and FA Cup in the League Cup over two legs.

With the club troubled by relegation worries, he led them to a 17th placed finish and promptly signed a new rolling one-year contract.

The former Notts County and Sheffield Wednesday player had spent four years in charge of his country before taking the York job.

Jarvis renewed his acquaintance with Nigel Worthington in the summer when he signed a two year contract after leaving Torquay United.

The pacey striker was highly rate by the academy staff at Norwich City and was given his first team debut by Worthington in 2003.

The 27 year old has been in scintillating form so far this season netting 8 times forging a deadly partnership with Wes Fletcher.

The former Notts County and Walsall loanee has also represented England at Under 16, 17 and 19’s level.

Accrington Stanley and York City have met on 55 previous occasions in all competitions with Stanley holding the advantage in the head-to-head record with 27 wins to the Minstermen’s 17. There have been eleven draws.

The first meeting between the sides was in 1930 in Division Three (North) when the teams battled to a 1-1 draw at Peel Park.

Last season’s match here at the Store First Stadium, which York won 1-0 thanks to Jason Walker’s goal, was the first Football League meeting between the sides in 51 years.

The return game, at Bootham Crescent in April, saw Peter Murphy score late in the game to give the Reds a 1-1 draw and an invaluable away point.

The Reds ended their two match losing run with the dramatic last gasp win at Mansfield on Saturday.

They’ve lost just one of their last six home matches and are 17th in League Two, three points clear of the relegation places and four points behind 13th placed Wycombe.

Nigel Worthington’s men have drawn their last four league games, with the latest a 0-0 at home to Oxford.

Their last league win was a 4-1 hammering of Scunthorpe at the end of October.

They are 21st in League Two, just a point from the relegation places.

James Beattie has no new injuries ahead of the busy Christmas period and now that Rob Atkinson and Andrew Dawber have returned to training has a full strength squad to select from.

Striker Danny Webber, who missed the win at Mansfield through illness, is also back on the training field and in contention.

York striker Ryan Bowman is back in the picture after he served a four match suspension after picking up his second red card of the season.