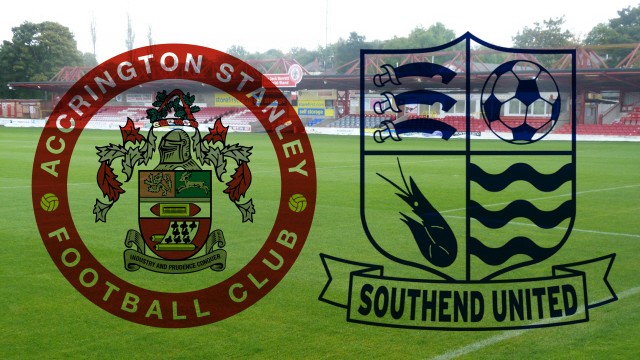 Southend United make the long trip north tomorrow for the latest game of the festive season at the Store First Stadium.

The Shrimpers were formed in 1906 and originally played in the Southern League before they co-founded the new ‘Third Division’ in 1920.

Finishing third in the 1932 season and the 1950 season remained United’s highest place finish until 1991. The Shrimpers enjoyed back-to-back promotions in the 1990 and 1991 which led them to the Second Division and just over a decade later found themselves back at that level after winning League One.

The following season say United beat Manchester United and Leeds in the League Cup but were relegated back to League One at the end of the campaign.

In 2010 they were relegated again, this time to League Two, and they have been there ever since but under former Hull boss Phil Brown they are now eyeing a return to the third tier.

World Cup winning England captain Bobby Moore was Southend manager between 1984 and 1986. His managerial record at the club was unspectacular but he remained associated with them as a Director until his death in 1993.

In 2005, Derby County came calling after George Burley’s departure and Phil took over the helm. Unfortunately, his time at Pride Park was unsuccessful and he was dismissed after only seven months.

However, later that year, he kept Hull City in the Championship after being placed in temporary charge and was handed the job on a permanent basis that summer.

In his first full season, Phil led the Tigers to the Premier League, beating Bristol City 1-0 in the 2008 play-off Final. Brown kept his side in the top flight before leaving the club in June 2010.

Deepdale was the next destination for Phil as he was appointed the boss of Preston North End in January 2011. He spent less than a year in Lancashire, leaving the club in December 2011. He was out of football for 18 months until the Shrimpers came calling in April, with Phil taking over from Paul Sturrock.

The winger come striker is in red-hot form for the Shrimpers this season and is currently leading the way in the club’s scoring charts.

Hurst signed for the club in the summer of 2012 after deciding to snub a new deal at Walsall, instead putting pen to paper on a two-year deal at Roots Hall.

The former Stockport, Chesterfield, Carlisle and Morecambe man has the ability to turn a game on its head in a flash and his form this season has been nothing short of remarkable.

Accrington Stanley and Southend United have met on ten previous occasions in all competitions with the Shrimpers holding the advantage in the head-to-head record with four wins to Stanley’s three. There have been three draws.

The first meeting between the sides was in 1958 in Division Three when Stanley ran out 3-0 winners at Peel Park.

The return game was on the opening day of last season at Roots Hall and saw the Reds win 1-0 thanks to Karl Sheppard’s header.

The Reds extended their unbeaten run to two matches with a 1-1 draw with York on Boxing Day.

They’ve lost just one of their last seven home matches and are 18th in League Two, three points clear of the relegation places and five points behind 13th placed Plymouth.

Phil Brown’s side are also unbeaten in two with a Boxing Day win over AFC Wimbledon following a 1-1 draw with Rochdale.

The Shrimpers sit sixth in the League Two table, three points from the top and two ahead of eighth placed Fleetwood Town.

James Beattie is set to continue with Andrew Dawber in goal after Marcus Bettinelli was recalled by Fulham.

Striker Danny Webber is in contention to start after coming on as a sub after illness against York. There are no new injury concerns.

Full Back Julian Bennett remains unavailable with a long term knee problem and fellow defender Luke Prosser is a doubt due to concussion.

Mark Phillips is likely to continue in his place.