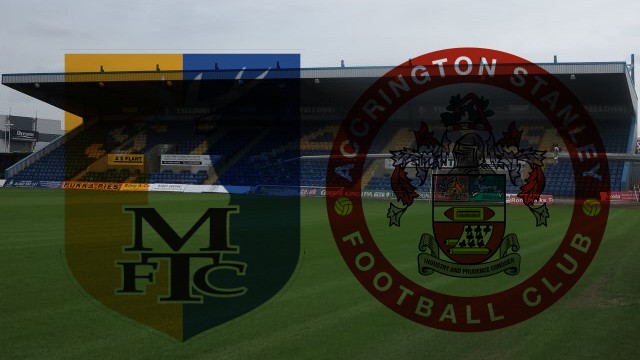 Stanley hit the road tomorrow for the first game of the Christmas period – a trip to Mansfield Town.

The club then became known as Mansfield Town in 1910. In 1921 the Stags were admitted into the Midland Counties League and won the league title on two occasions, in 1924 and 1929.

The club was again relegated in 1972, before gaining another promotion back to the Third Division three seasons later. In the 1976/77 season the Stags were promoted to the Second Division for the only time in their history. The Stags spell in the Second Division proved to be short lived, as they were relegated the following season.

In 1987 the Stags won the Freight Rover Trophy, beating Bristol City on penalties after a 1-1 draw, in front of 58,000 fans at Wembley.

In the 2007/08 season the Stags were relegated to the Conference Premier, before being promoted back into the football league at the end of last season.

In the 1968/69 season the Stags became only the fourth ever side to defeat clubs from five different divisions in the FA Cup. Along the way the Stags defeated First Division side West Ham United 3-0, before losing to a Leicester City side containing Peter Shilton in the quarter finals.

41 year old Cox took over at the Stags in 2011 and led the club to the Conference Premier title last season. Cox’s only other previous managerial experience was a spell at Eastwood Town between 2006 and 2011.

Former Forest Green Rovers front man who joined the club in 2011, going on to score nine times in his debut campaign for the Stags.

Last season was a huge frustration for the 25-year-old as he missed the majority of the campaign through injury but was still offered a new deal as the club made the move back to the Football League.

He netted for the Stags in their midweek FA Cup tie against Oldham and may find himself thrust to the forefront of the home team’s attack following an injury to top scorer Sam Clucas earlier this week.

The Stags moved to One Call Stadium in 1919 after previously playing at Radcliffe Gate and Newgate Lane. The current capacity of One Call Stadium is 8186, and the record attendance inside the stadium is 24,467, which was set when the Stags hosted Nottingham Forest in the FA Cup in 1953.

The two sides have met on 47 previous occasions, with Mansfield holding the upper hand with 20 wins to Stanley’s 16. There have been eleven draws.

Only five of those meetings have come in the last 50 years though, with the Reds winning three and only losing one.

The last meeting between the sides was in December 2007 when goals from Paul Mullin and Andy Procter gave Stanley a 2-1 away win.

The Reds have lost their last two matches, away at Northampton and at home to Exeter.

That defeat at Sixfields was their only away reverse in five though, meaning James Beattie’s side have some pedigree on the road.

They sit 21st in League Two, two points from the relegation places and two points behind their hosts.

Paul Cox’s team have been enduring a lean spell in the league that has left them winless since late September when they triumphed 1-0 at high flying Chesterfield.

They’ve since thrashed St. Albans 8-1 in the FA Cup but lost 4-1 at home to Oldham in the same competition in midweek.

The Stags are 17th in the League Two table.

Longer term absentees Rob Atkinson and Andrew Dawber have recovered from hamstring and groin problems respectively and have resumed training with the rest of the squad.

New dad Danny Webber has been struggling with illness over the last few days but returned to the club today.

Top scorer Sam Clucas is out for up to eight weeks after suffering ankle ligament damage.

He joins attacking midfielder Ben Hutchinson on the sidelines. He’s out for four to six weeks with a hamstring problem.

This match is TICKET ONLY – Stanley supporters should not travel without a ticket. These are available from the Store First Stadium until 5pm today. These are priced at £18 for adults, £13 for concessions (students & over 60′s) and £8 for juniors (7-16). Children aged six and under go free.