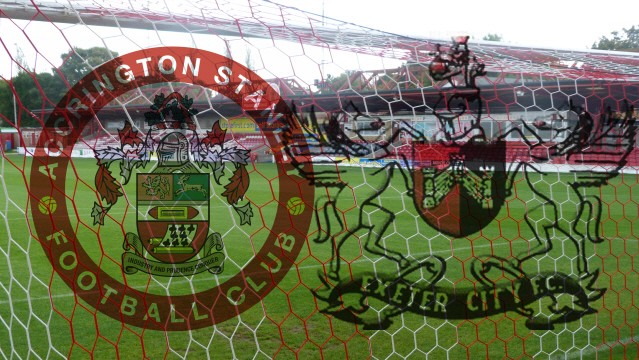 Exeter City are the visitors to the Store First Stadium tomorrow in SkyBet League Two.

Ahead of kick off, the official website looks at the game in detail.

Exeter City can trace their early history back to the merger of two local clubs in 1904.

They became a Football League club in the 1920’s and the 1930’s proved to be very successful, with the club reaching the sixth round of the FA Cup and achieving their highest league finish of second in the Third Division (South).

In the 1950’s the club were founder members of the Fourth Division and stayed there until winning promotion until 1964. They were relegated the following season but returned to the third tier in 1977 and stayed there for seven years.

In more recent years the club survived major financial troubles, in 95/96 and then again in 2003, with the latter campaign ending in relegation to the Conference.

But under the management of current boss Paul Tisdale the Grecians returned via the Conference play-offs in 2008 and made it back-to-back promotions the following season to make it into League One.

Exeter were one of the sides who were chasing Stanley in the race for the Conference title in 2006. A 3-1 Stanley win at St James’ Park gave rise to a popular supporters’ chant.

The Grecians were the first club side to play the Brazilian national team during a tour of South America in 1914.

Paul Tisdale is the longest serving manager in the Football League and second only to Arsene Wenger in English football’s top 92 teams after being appointed as Exeter boss in 2006.

The 40-year-old’s track record, including winning the Conference play-offs and finishing second in League Two, since has seen him linked with a number of high profile managerial vacancies elsewhere.

He began his playing career as a youngster at Southampton, making a few first team appearances as well as spending time out on loan before joining Bristol City. After leaving Ashton Gate he tried his luck abroad in Finland and Greece.

He was forced to retire from playing early due to injury and became involved in a coaching capacity at Team Bath at a time when they made history for their FA Cup exploits.

It was as manager of the university outfit that he caught Exeter’s attention and he was soon installed at the club he had earlier played for to lead them back into the Football League.

Striker Gow arrived at Exeter from the most unlikely of places – transferring from Indian club East Bengal in.

His career at the Grecians to date has been slightly hampered by injury but his silky skills and excellent movement make him a valuable asset to the City frontline.

Gow has been in sparkling form this season netting 5 goals so far this season as the Grecians look to mount a play-off push.

The ex-Blackpool front man has fast turned into a fan favourite at St. James Park – this despite having turned out for fierce local rivals Plymouth Argyle.

Accrington Stanley have met on 13 previous occasions in league and cup ties.

Six of these meetings have been in the Football League, six in the Conference and just one in the FA Cup.

The first meeting was the cup tie, way back in 1927, when Clarkson and Martin scored for Stanley to earn them a 2-0 win and a fourth round tie with Chelsea.

Since then Stanley have won four times with the Grecians triumphing on seven occasions. There’s only been one draw.

Exeter have had the best of the fixture since they returned to league football in 2008 with three wins from four meetings. The Stanley win during that period came courtesy of a 2-1 home win in March 2009 with John Miles and Craig Lindfield the scorers.

Last season Paul Tisdale’s side won both games, 3-0 at the Store First Stadium and 2-0 at St. James Park.

Stanley were beaten for the first time in nine league fixtures last time out at Northampton Town but have now had a week without a game to recover.

James Beattie’s side are looking for a third consecutive home victory after beating Torquay United and Fleetwood Town.

The Grecians are without a win in their last eight games in all competitions, with their last League Two victory coming in October.

They’ve drawn their last two games, against Bury and Wycombe, and sit eleventh in League Two, six points better off than the Reds.

Stanley have no new injury concerns after their free weekend, with Rob Atkinson back in training after his hamstring problem but unlikely to feature.

Goalkeeper Andrew Dawber is the only definite absentee after he underwent groin surgery a couple of weeks ago.

Exeter captain Danny Coles has undergone knee surgery and will be out for the foreseeable future and experienced midfielder Matt Oakley who has an ankle problem.

This is a category B match and all supporters can pay on the turnstiles. Admission prices are £15 for adults, £10 for concessions, £6 for students and under 16′s and just £1 for all accompanied under 12′s.