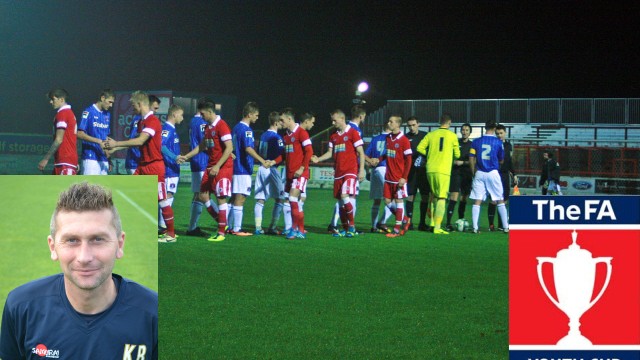 Stanley Academy Manager Keith Brown is excited about the prospect of the club playing in the third round of the FA Youth Cup for the first time this evening.

The Reds host Premier League side West Ham United after beating Carlisle United and Ilkeston in the previous two round.

“It’s a great tournament to be playing in. I think it’s something that youth players coming through anywhere always look forward to; bigger games, bigger crowds, a bigger occasion and the chance to play against Premier League opposition. I think these players are really looking forward to testing themselves to see what kind of level they are at. It’ll be a great experience for them.”

The young Reds are on a seven match unbeaten run in all competitions and hammered Preston 5-1 in the Youth Alliance at the weekend but now face a bigger test against the Hammers.

“Their players will be at a very good level but we think that we’ve come along well this season and developed and we’re moving in the right direction so we’re really looking forward to the challenge,” said Brown. “We’re very organised, we’ll have a good structure about us, be very disciplined and we’ll give it our best shot.

“At senior level in the FA Cup there are always upsets so if we go about the game in the right manner and we’re disciplined and organised and play to our game system then you just never know – there could be an upset at this level too.”

Admission prices are just £5 for adults, £3 for concessions and £1 for under-12’s that are accompanied by an adult and Brown hopes that the Store First Stadium will see a bumper crowd to help his side continue their cup run.

“It’s good for the club in general and good for Accrington as a town,” he said. “I think a lot of people have been talking about it and I know that a lot of scouts from a lot of other clubs will be here to watch. We hope that there will be a decent crowd here so that the players from both sides can really enjoy that different atmosphere.”

Kick off at the Store First Stadium is 7pm.