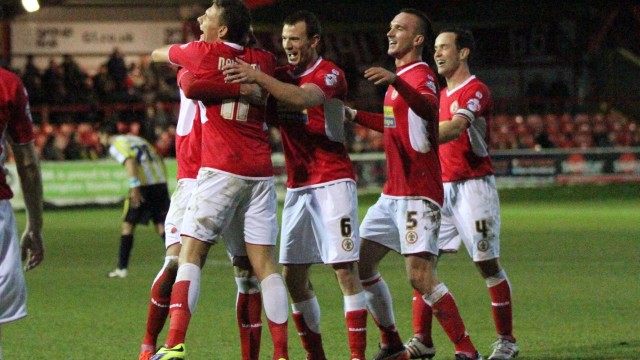 Accrington Stanley extended their unbeaten run in League Two to seven games, coming from behind to claim victory over a struggling Torquay United.

Paul McCallum’s superb strike gave the Gulls the lead but a brace from Kal Naismith ensured Stanley sent their visitors back down south with nothing to show for their efforts.There was one change to the starting eleven from the victory at Scunthorpe with Michael Liddle replacing the injured Lee Naylor at left back.

Stanley started brightly and skipper Luke Joyce, making his 200th appearance for the club, almost marked the occasion perfectly but his 20 yard shot came back off the post.

The early pressure continued with Torquay goalkepeer Martin Rice making a superb save to deny Peter Murphy from 3 yards out, turning the ball round the post when the midfielder looked certain to score.

Despite the early dominance, the visitors took the lead against the run of play after a quarter of an hour.

A corner wasn’t cleared and the ball fell to Paul McCallum, who superbly lofted the ball over Marcus Bettinelli and into the far corner to put Torquay 1-0 up.

It was almost 2-0 shortly after as Aaron Downes found himself free at the back post from a corner but his header was cleared off the line by the imposing figure of Kayode Odejayi.

Dale Tonge was the first name into the referee’s book for a late tackle on Piero Mingoia and, from the resultant free-kick, Aldred saw his stooping header hacked off the line.

The defender was then in action inside his own penalty area as he cleared a goalmouth scramble with the visitors looking to double their lead.

They almost got a second goal with Downes threatening again, this time sending a header narrowly wide of the target.

It proved to be a costly miss from the defender as Stanley equalised with their next attack.

Peter Murphy swung the ball into the area and Kal Naismith timed his run to perfection, planting his header into the top corner and beyond Rice to pull Stanley level.

With the wind in their sails, James Beattie’s men went in search of another goal immediately and almost got it but Odejayi could only head over from four yards when well-placed as the sides went into the interval level.

It was one-way traffic after the break with the home side looking to exert their dominance. Naismith cut inside, skipped past a couple of challenges and fired in a shot that was palmed away by Rice.

George Bowerman, fresh from his first Stanley goal last weekend against Scunthorpe, clearly fancied getting himself another but his low drive was blocked by Anthony O’Connor.

With just under 20 minutes left on the clock, James Gray replaced George Bowerman and Stanley struck shortly after the substitution to take the lead.

Hunt’s cross from the right hand side was perfect for Naismith, who diverted the ball beyond Martin Rice for his second goal of the game to complete the turnaround.

Gray almost doubled the lead, driving into the area and unleashing a fierce shot from a tight angle but Rice got down well to make the stop.

Torquay substitute Ade Azeez created a chance for himself on the edge of the area but his curling effort was batted out by Bettinelli.

As the board went up to indicate four minutes of stoppage time, Hunt heroically threw himself in the way of Nathan Craig’s shot to block the midfielder’s volley.

It was to be the last action of the game as Stanley held on for a victory that was full of grit, determination and character.