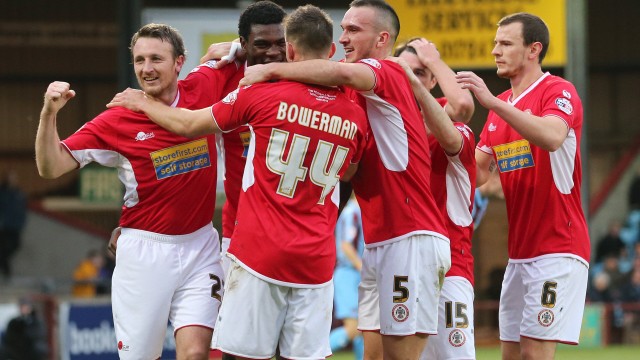 The Reds started in threatening form, with Bowerman racing onto a ball over the top in the fourth minute before poking the ball past goalkeeper Sam Slocombe. The striker went down under challenge but the referee gave a corner, judging that the keeper had got the ball.

Two corners in quick succession followed and Peter Murphy had the ball in the net moments later but saw the flag raised against him for offside.

But James Beattie’s men didn’t have to wait long to see the net bulge again; with 25 minutes on the watch a virtuoso moment from Bowerman broke the deadlock when the 22-year-old cut in from the right flank, beat Niall Canavan and curled a left foot shot into the left side of the net.

The home side looked to respond, with Sam Winnall heading Deon Burton’s cross wide before David Syers dragged a shot wide but it was the visitors who looked likely to score another.

Kal Naismith was invited to run and shoot and took up the offer only to see his shot fly just wide before the Reds did add a second ten minutes from the break. Lee Naylor was provider, hanging a fine ball in from the left for Odejayi to head home his third goal of the season unopposed at the far post.

And it might have been better when Murphy burst into the box and squared for Bowerman only for a defender to turn the ball past Sam Slocombe and the post for a corner.

Home manager Brian Laws made a double change at the break as he looked to jolt his side into life but Stanley conjured the first chance of the half when Slocombe spilled Bowerman’s strike and Murphy could only guide the rebound into the side netting.

But the hosts did improve and one of those subs, Reuben Noble-Lazarus, was the catalyst. He rattled the post with a rasping effort from the edge of the box five minutes after coming on but still the Reds held firm.

In fact Murphy was close to adding a third goal when he exchanged passes with Odejayi and got a shot in. It seemed destined for the corner but Slocombe got down to turn the ball round the post.

Stanley could then thank Marcus Bettinelli for their clean sheet with the Fulham loanee saving at point blank range from Winnall’s header before he turned sub Chris Iwelumo’s diving effort around the post.

The Reds kept pressure on the ball and stayed solid through five added minutes to extend their unbeaten league run to six games and climb out of the bottom two in League Two.