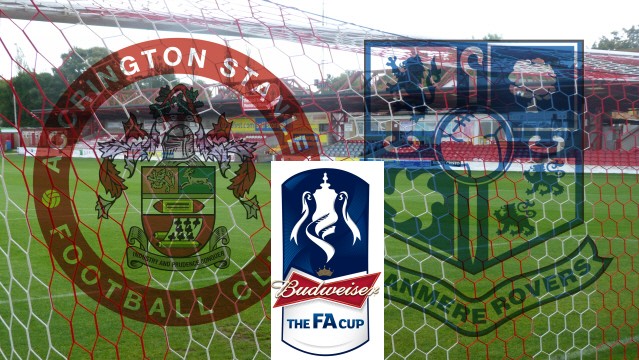 Tranmere Rovers are the visitors to the Store First Stadium tomorrow afternoon for the First Round of the FA Cup.

Tranmere Rovers were founder members of the Third Division North in 1921 but can trace their origins back to the 1880s when the club was formed as the football arm of a local cricket club.

They’ve been a Football League club ever since 1921 and have enjoyed periods of good success between then and now.

Rovers won the Third Division North for the first time in 1938 to secure promotion to the Second Division but were relegated a year later. That Championship is still the only one in the club’s Football League history.

From the 60s onwards the club developed a reputation for cup runs, reaching the fifth round of the FA Cup for the first time in 1968 and knocking Arsenal out of the League Cup in 1973.

The 80s proved to be a time of financial hardship but after going into administration manager John King then led the side from the foot of the Fourth Division to the brink of the top division in a remarkable run. They were Leyland DAF Trophy winners in 1989-90 as their rise continued, winning promotion to Division Two in 1991.

The 1990s saw the club miss out on promotion to the Premier League in three successive seasons courtesy of three play-off defeats before their cup exploits came to the fore again at the turn of the Millennium when they reached the League Cup final under John Aldridge’s management, losing 2-1 to Leicester City at Wembley.

These days Rovers are in League One and sit 21st in the table ahead of this weekend’s cup ties.

Former Liverpool striker John Aldridge served the club for a decade as player and manager after joining from Real Sociedad in 1991.

The presenter of BBC’s Question Time David Dimbleby is one of Tranmere’s most famous fans.

Ronnie Moore returned to Tranmere Rovers as Manager in March 2012.

He took over a team that had won just once in 20 games in 2011-12 and immediately turned the club’s fortunes around, guiding Rovers away from the relegation zone to a top half finish and receiving a Manager of the Month nomination in the process.

He reshaped his squad over the summer and led Rovers to a 12 game unbeaten run at the start of 2012-13, taking the club to the top of npower League One and being named Manager of the Month for both August and September.

The club’s form earned him a new two and a half year contract at Prenton Park in January 2013.

This is Moore’s second spell as manager. His first spell on the Wirral was from 2006-2009 with the club finishing in the top half of the division each season and within two minutes of a play-off place in 2008-09.

Lowe, from Liverpool, began his professional career at Shrewsbury Town in 2000. He spent five seasons with the Shrews before moving to Chester and then Crewe Alexandra.

He rejoined Chester in 2008 and moved to Bury a year later. After two seasons with the Shakers he moved to Sheffield Wednesday.

He was a big part of the Wednesday side which gained promotion to the Championship two seasons ago but was soon packed off to MK Dons as part of Dave Jones’ squad rebuilding process.

Lowe is a feared marksman at League One level and has netted over 160 times in his professional career.

Accrington Stanley and Tranmere Rovers have met on 69 previous occasions in competitive games going back all the way to 1922.

Since 2008 there have been five meetings in cup competitions, with the Reds without a normal time win in that time though they did win on penalties in the Johnstone’s Paint Trophy in 2010.

The last FA Cup meeting came in November 2008 when after a goalless draw the home side won the first round replay 1-0 thanks to a goal from Chris Shuker.

The sides actually met back in July in pre-season friendly that ended 1-1 at the Store First Stadium. Kal Naismith found the net for Stanley but his goal was cancelled out by Chris Atkinson.

The Reds are unbeaten in five matches and have tasted defeat just once in their last seven games.

They are 23rd in the League Two table, two points behind Bury.

Ronnie Moore’s men are unbeaten in three games after draws with Preston and Rotherham came either side of a 3-2 win over MK Dons.

They are 21st in the League One table.

James Beattie remains without hamstring injury victim Rob Atkinson but has no other major injury concerns and faces something of a selection headache for the game.

Evan Horwood and Akpo Sodje could return from injury for Rovers whilst defender Jim McNulty is available after extending his loan from Barnsley.