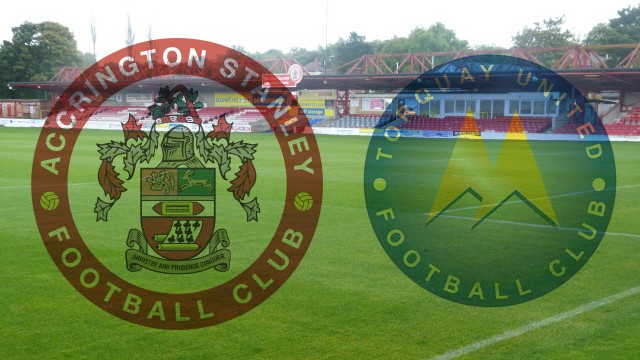 The history of Torquay United begins with the merging of Ellacombe, Babbacombe and Torquay Town. The elevation of Exeter City and Plymouth Argyle to the Southern League at the end of World War I prompted the emergence of a new Torquay United in 1921.

The late 1920’s saw them win Football League status but it took them until 1960 to gain their first promotion, from the old Division Four.

The 60’s saw them operating in the third and fourth tiers under future Manchester United manager Frank O’Farrell.

In more recent history the Gulls were twice spared relegation from the League, in 1985 and 1996 but were also regular visitors to Wembley and participants in the play-offs.

In April 2007 they did lose their Football League status but they returned two years later with a 2-0 play-off final win over Cambridge United.

They then made it into the League Two play-offs in two consecutive seasons but last season found things much harder going, ending the campaign 19th.

Leroy Rosenior has gone down in football history for his ten minute managerial tenure at Plainmoor in 2007. He was famously appointed before losing his job moments later after the club was taken over.

Knill was a centre half with the likes of Halifax, Swansea and Bury whose Alan’s managerial career began with Rotherham in 2005 and his experience with the Millers was put to good use during a spell on the coaching staff at Chesterfield.

A return to Bury arrived in February 2008 and the union immediately worked. His first full season in charge of the Shakers ended with the club finishing just one place outside the automatic promotion slots.

He then had to deal with the disappointment of a semi-final play-off defeat to Shrewsbury on penalties, but he was back in the promotion race for the 2010-11 season. Bury were flying high when Championship outfit Scunthorpe came looking for a former hero.

The Iron were sadly on the decline and Knill was unable to save the club from relegation after many of the stars procured by Nigel Adkins had left for bigger clubs. Alan departed Scunthorpe last October and took over for his initial spell as United boss in February.

He would spend the next three months covering for Martin Ling, who was away on sick leave. Alan would guide the Gulls to League 2 safety in memorable fashion and was named permanent boss in May 2013.

Chappell came through the youth ranks at his hometown club Sheffield United and made his debut in a League Cup game against Hartlepool in 2010.

The tricky winger went on loan to Burton Albion in the autumn of 2012 to gain some first team experience.

He later went onto join the Gulls in a loan spell towards the end of last season and played a massive part in arresting the club’s poor league form towards the back end of the campaign.

Despite the Gulls’ poor start to the season Chappell has been the bright spark weighing in with 5 goals to date.

Accrington Stanley and Torquay United have met on eleven previous occasions, with ten games coming in the Football League and one in the FA Cup.

That FA Cup tie was the first meeting between the sides, way back in December 1930 when the Gulls were 1-0 winners at Peel Park.

They then didn’t cross paths again for almost 76 years after the Reds had returned to the Football League. The first League Two meeting came in October 2006, with Stanley taking all three points away from Plainmoor thanks to goals from Michael Welch and Gary Roberts.

In fact Stanley won both meetings in that season, with Peter Cavanagh scoring the only goal of the game in the return fixture in March 2007.

The balance of power between the sides has been very equal since then with the Reds edging the head-to-head record with five wins to Torquay’s four. There have been two draws.

Last season’s game at the Store First Stadium was a goalless draw in March. Stanley lost 3-1 at Plainmoor in October. Padraig Amond’s goal cancelled out Rene Howe’s opener but Billy Bodin and Lee Mansell both struck in the second half to give the Gulls all three points.

The Reds are unbeaten in six league matches following last Saturday’s 2-0 win at Scunthorpe United but they did lose their last game at the Store First Stadium, 1-0 to Tranmere in the FA Cup First Round.

James Beattie’s side sit 22nd in the League table but are only three points behind 19th placed York City.

Alan Knill’s team have lost their last two matches in all competitions but they won on their last trip to the north west, beating Bury 3-1 on the opening weekend of November.

They are 23rd in League Two on the same points as Stanley and only kept below them on goal difference.

Beattie is still without centre back Rob Atkinson who continues his recovery from a hamstring problem and he is joined on the sidelines by Andrew Dawber. The young goalkeeper has returned from his loan spell at Clitheroe to have hernia surgery.

Laurence Wilson is available to the manager once again after fears he’d suffered a recurrence of a groin problem proved to be unfounded.

Winger Billy Bodin, who scored against Stanley last season, is a doubt for the Gulls as is on loan Blackburn Rovers defender Anthony O’Connor. The latter has a knee problem.

So Far This Season: Ten games, 39 yellow cards, one red
Last Stanley Game:  this will be his first visit to the Store First Stadium

All supporters can pay on the turnstiles.