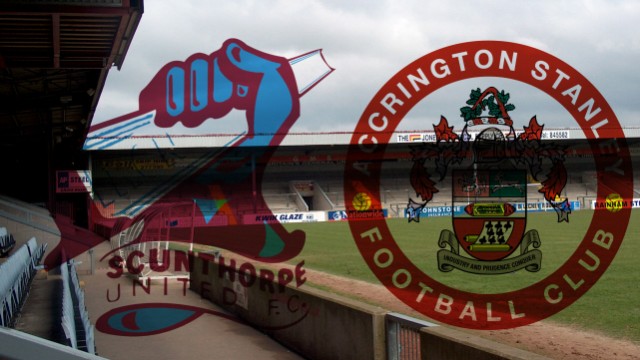 Stanley make the trip to Glanford Park tomorrow to take on Scunthorpe United.

The club was formed in 1899, before merging with Lindsey United in 1910 and becoming known as Scunthorpe and Lindsey United. They then joined the Midland League in 1912 and won the league for the first time in the 1926-27 season, before lifting the title again in the 1938-39 season.

In 1950 the club was finally accepted into the Football League where they joined Division Three North. The club then won promotion to the Second Division in the 1957-58 season, before finishing fourth in Division Two in the 1961-62 season, the clubs highest ever league finish.

The Iron were then relegated back to Division Three in 1964, before dropping to the Fourth Division in 1968. The Iron were again promoted in 1972, but were relegated the following season.

In 1999 the club reached the Division Three play-off final at Wembley, where they defeated Leyton Orient to gain promotion to Division Two, however the club was relegated the following season.

The Iron have had three England captains play for the club during their careers. Kevin Keegan and Ray Clemence both joined Liverpool directly from the Iron, while former England cricketer Sir Ian Botham also appeared for the club.

52 year old Laws is currently in his third spell in charge of the Iron. Laws was first appointed as player-manager at Grimsby Town in 1994, before being sacked by the club in 1996. He then had two spells at the Iron between 1997 and 2004, before managing both Sheffield Wednesday and Burnley.  Laws then returned to the Iron as manager in October 2012.

Prior to being a manager Laws had a successful playing career as a defender, making over 100 appearances for Burnley, Middlesbrough and Nottingham Forest as well as spells at Huddersfield Town, Grimsby Town, Darlington and Scunthorpe United.

22 year old striker Winnall joined the Iron in the summer on a free transfer from Wolverhampton Wanderers and is currently the clubs top scorer after netting seven times in his first 15 appearances for the club.

During his time at Wolves, Winnall left the club on loan on four separate occasions. His most successful spell came at Burton Albion, where he scored seven goals in 19 appearances. He has also had spells on loan at Hereford United, Inverness Caledonian Thistle and Shrewsbury Town.

The Iron moved to Glanford Park in 1988, after previously playing at the Old Show Ground. The current capacity of Glanford Park is 9088 and the record attendance inside the stadium is 9077, which was set when the Iron hosted Manchester United in the League Cup in 2010.

The clubs all time record attendance was set at the Old Show Ground in 1954, when 23,935 watched the Iron play Portsmouth in the FA Cup fourth round.

The two sides have met on 20 previous occasions, though only one of these games came in the last 20 years.

That match was in the League Cup in August 2011 when the Iron won 2-0 away from home thanks to goals from Chris Dagnall and Andy Barcham.

Before that teams met in the FA Cup in 93/94, with a last minute goal consigning non-league Stanley to a 3-2 defeat.

The Reds last tasted victory in the fixture back in 1957.

Scunthorpe are eighth in the current League Two table and only kept out of the play-off places by goal difference.

The Iron are without a win in their last three matches in all competitions after a goalless draw with neighbours Grimsby in the FA Cup followed a draw with Chesterfield and a defeat at York.

Stanley remain 23rd in the table but could climb out of the relegation places with a victory.

James Beattie has seen his side go five matches unbeaten in League Two though they were beaten by Ryan Lowe’s last minute goal in the FA Cup last time out.

New signing Reuben Noble-Lazarus could make his debut but midfielder Matt Sparrow misses out with a hamstring injury.

James Beattie remains without hamstring victim Rob Atkinson. James Gray and Shay McCartan are away with Northern Ireland and Laurence Wilson is a doubt.

Stanley supporters will be able to pay on the turnstiles. The Iron have designated the fixture as a category B game at Glanford Park, meaning admission prices will be:

Stanley fans will be housed in the all seater south stand.