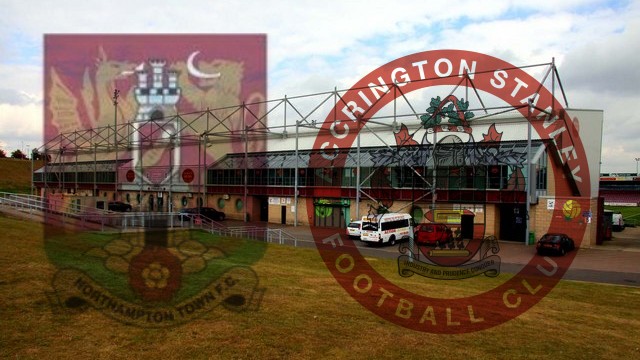 Stanley make the trip to Sixfields tomorrow to take on Northampton Town.

Northampton Town were formed in 1897 and joined the Northants League and won the championship in their second season. The following season the club joined the Midland League, before joining the Southern League in time for the 1901-02 season.

The club then won the Southern League in the 1908-09 season before joining the football league in Division Three (South) in time for the 1920-21 season.

The Cobblers then finished in 13th place in the 1957-58 season and were elected to Division Four. The club only spent three seasons in Division Four before being promoted after finishing in third place in the 1960-61 season. The club were then crowned champions of the Third Division two seasons later, before the club finished as runners up of Division Two in the 1964-65 season.

The 1965-66 season was the only season in the Cobblers history that they spent in the top flight of English football. A dismal run of relegation followed, and by the end of the 1968-69 season the Cobblers were relegated back to Division Four.

Success returned for the Cobblers as they were promoted back to the Third Division at the end of the 1975-76 season, before the club were relegated the following season.

The 1996-97 season saw the Cobblers reach the Division Three play-off final at Wembley. Promotion was sealed with a 1-0 victory over Swansea City. The club then reached Wembley again the following season, but couldn’t achieve back to back promotions after a 1-0 defeat by Grimsby Town.

The following 11 seasons saw the Cobblers achieve two promotions and three relegations to leave the club In League Two. Last season the club suffered defeat at Wembley in the League Two play-off final against Bradford City.

In the 1969-70 season the club hosted Manchester United in the FA Cup Fifth Round. The visitors won 8-2 with George Best netting six times.

42 year old Boothroyd took over at the Cobblers in November 2011 and led the club to the League Two play offs last season. Boothroyd started his managerial career at Watford in 2005 before leaving the club in 2008. Spells at Colchester United and Coventry City followed before he took over at Northampton.

Prior to being a manager Boothroyd enjoyed his most successful spell as a player at Mansfield Town, where he made 102 appearances. Boothroyd also has spells at Huddersfield Town, Bristol Rovers, Hearts and Peterborough United.

20 year old Norris joined the Cobblers on loan from Brentford in October and has made a fantastic start for the club, scoring four goals in his first six league appearances. Norris previously had a spell on loan at Boreham Wood, where he scored three goals in seven appearances.

Norris has also made two league and two cup appearances for Brentford, scoring in the Johnstone’s Paint Trophy against AFC Wimbledon earlier in the season.

The sides have met on ten previous occasions, with the head-to-head record standing at five Northampton wins, three Stanley victories and two draws.

The Reds have never beaten the Cobblers away from Accrington and have failed to score on their previous four visits to Sixfields.

Last season Aidy Boothroyd’s side won both games between the teams, 2-0 at Sixfields and 4-2 at the Store First Stadium.

They are bottom of the League Two table, two points from the safety line.

The Cobblers have so far won two, drawn four and lost two of their eight home matches this season.

Stanley are now unbeaten in eight league games having won their last three against Scunthorpe, Torquay and Fleetwood Town.

They sit 19th in the League Two table, five points from the relegation places and three behind Plymouth who are 14th.

Northampton are without two midfielders who started their midweek draw with Chesterfield. Kane Ferdinand has returned to Peterborough and Chris Hackett is suspended after picking up his fifth yellow card of the season.

New loan signing Izale McLeod is eligible to play after completing his move on deadline day.

Full back Nicky Hunt is back in contention after serving his one match ban in midweek and fellow defender Lee Naylor has returned to training after a foot injury.

Rob Atkinson has stepped up his recovery from a hamstring problem but is unlikely to feature.

Stanley supporters can get a discount on admission if they pre-purchase their tickets before 5pm today – http://leescarter.com/2013/11/northampton-admission-details/