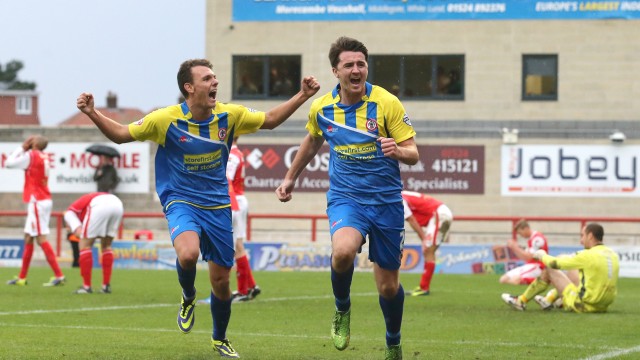 Murphy: “We’re Right Back in the Mix”

Last weekend’s match winner Peter Murphy believes that Stanley can make it three wins in a row against Wycombe Wanderers this afternoon.

The 23-year-old netted a 93rd minute winner at Morecambe seven days ago and is now targeting an ascent out of the relegation places with a victory over the Chairboys.

And the Stanley number two told the official match day programme that confidence levels in the dressing room are high.

“All season long, in training every day, we’ve never been down,” he said. “We’ve always been upbeat because we know what we can do. We weren’t getting the results but we weren’t getting the rub of the green and that just makes you think that if you keep doing what you’ve been doing then it will turn.

“The gaffer believes in us and does everything for us and just to repay him with a win was the best thing we could have asked for.

“When we’ve won the last two games he hasn’t changed. He’s been saying the same things and going about it in the same way and that can only help us.”

Wycombe come to the Store First Stadium 12th in the League Two table after a defeat to Bury and Murphy believes that league position is irrelevant given the results all over the division.

“Anyone can beat anyone on their day and we know that we haven’t faced a team yet who we fear,” he explained. “We know that we’re good players and we can play well and if we do that we will get results.

“You can easily go on a run and three or four wins gets you right back up there. A week or so ago we were out of it and people were saying that we had no chance. Three games in a week and seven points later and we’re right back in the mix.”

You can read a full interview with Peter Murphy in the match day programme, available around the ground this afternoon for £3.