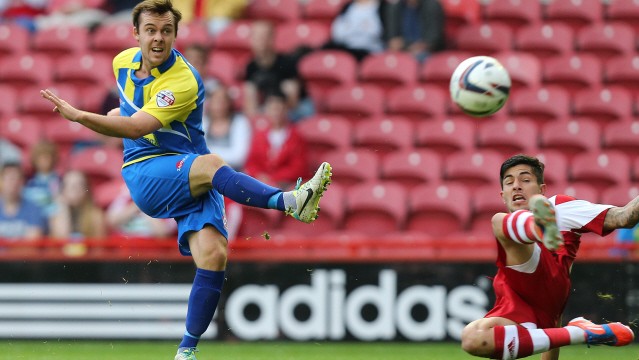 Liddle: “It’s Us Against Everyone Else”

Stanley defender Michael Liddle believes the players have been brought together by their disappointing start to the season.

The Reds went a dozen league games without a win before embarking on a seven match unbeaten run.

And the 22-year-old thinks the players and staff have developed a siege mentality that is serving them well.

“A few months ago everybody was thinking we’d gone so they only had to be better than one other team to stay up.

“Since we’ve been picking the results up, people can see us going past them. It’s nice to beat teams around you like Torquay but now we’re looking up and looking at the teams above us, looking where we can get to and where the wins are going to take us, only looking at going up really.”

Tonight the Reds face a Fleetwood Town side only a point off the top of the League Two table who will present James Beattie’s side with a real test. But Liddle insists the players are undaunted.

“It’s a great game to be playing and I’m really looking forward to it,” he continued. “We’ll go out there and play just as well and hard as we would against any other team. I don’t think they’ll relish coming here and playing us, the form we’ve got at the minute, the attitude and mentality, it’s going to be a really good test for us.

“Hopefully if we’re able to put in a good performance it will show where we are at as a team right now.

“It’s a derby so people always remember the last one that happened. They beat us (3-0 in March) so it would be nice to go out and put in a performance and get a win.

“In every derby, like Sunderland-Newcastle where I’m from, or Accrington-Fleetwood, people remind you about it. Even though you’re thinking ‘it’s just another game’ it’s always in the
back of your head that you go out there and put in that five per cent extra maybe. It always makes those games a bit more interesting.”

You can hear more from Michael Liddle about his return from injury below: