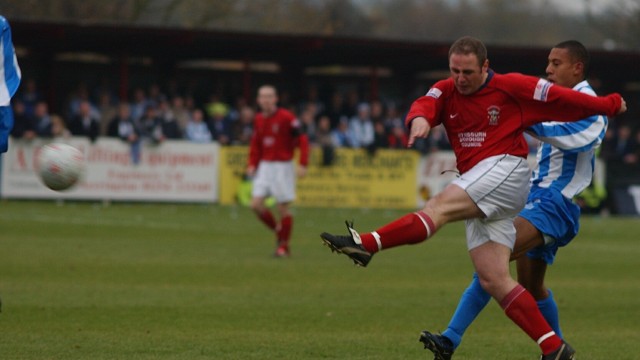 A decade ago today, non-league Stanley knocked Huddersfield Town of the Football League out of the FA Cup with a 1-0 home win .

The scorer was substitute Andy Gouck, who netted in stoppage time to give John Coleman’s side the victory.

“I can’t believe it’s ten years ago,” said the 41-year-old in an interview in today’s special match day programme. “It feels like yesterday! I had a great time at Accrington and the club will always have a special place in my heart because of the people there and the crowd but that day was extra special.

“I didn’t even start the game which I was disappointed with but the goal was just one of those that made it an incredible day. I spoke to John Coleman a few years later and he told me that it set the club on its way to being full time and ultimately getting back in the Football League. It’s nice to think that I helped to start it all.”

Today the Reds will hope to mark the anniversary with victory over Tranmere Rovers of League One – and Gouck knows all about the special cup occasion.

“It doesn’t matter where you’ve played before, from the very bottom to the very top, it’s the FA Cup,” he explained. “Everyone dreams of an upset, of shocking someone regardless of what round it is or what level you’re at. A few of us had played in cup ties before but it was a different feeling altogether. We were the underdogs, massive underdogs, so to go out there and win was special all round and surprised a lot of people. To win that tie was just massive.

“Today’s another one of those games. If you score the winner for Accrington today, people will remember your name. Ten years on people still talk to me about it and that result has gone down in the club’s history. Today somebody else has a chance to do the same thing.”

There’s a full interview with Andy Gouck in today’s match day programme, as well as FA Cup memories from Kayode Odejayi and Paul Beck, the first interview with recent signing George Bowerman, columns from James Beattie and Luke Joyce and the view from the opposition with Tranmere’s Ryan Lowe.