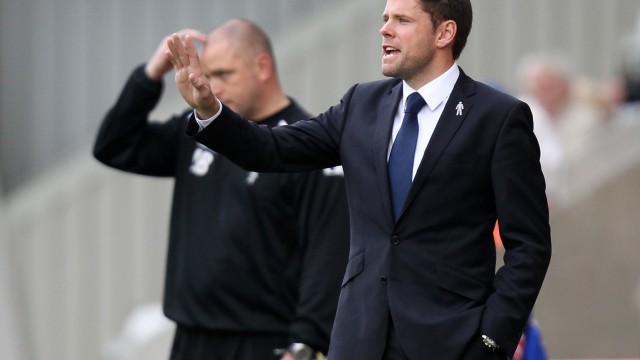 James Beattie will resist the temptation to tell his Stanley players about his exploits in the FA Cup as a player and instead focus on continuing their good form as they look to make round two.

The Reds host League One side Tranmere Rovers at the Store First Stadium tomorrow and Beattie, who was a finalist in the competition a decade ago with Southampton, doesn’t think he needs to tell his men what the cup means to everyone.

“I think they are bored of listening to me already so I don’t know if I should start rambling on with my old cup stories!” he laughed. “I’m sure the lads are aware and one or two may even ask but I’m sure they don’t want me to go on at them about the FA Cup. I’ve had some good times in the competition but it’s all about us now, what we can do and making new memories.

“It’s just all about maintaining our standards and taking what we’ve produced in recent weeks into this game. If the lads do that then I have no doubt that they’ll have stories of their own to tell about the FA Cup. We just have to stay level headed and focus on the next game. It just has that little extra twist to it when you consider what it would mean financially if we could get through.”

Stanley are unbeaten in five matches ahead of the visit of Ronnie Moore’s side and Beattie feels confident that his team can keep that run going and make it into the hat for round two.

“Everybody loves the FA Cup because of the giantkillings and the fact that smaller teams can do well and come up against the so called larger ones,” he said. “I remember as a kid watching all the highlights on the TV and there was always and upset and everyone always made a fuss about it and rightly so.

“I don’t see this year being any different and I don’t see any reason why we can’t go on a good run. Tranmere will have a different idea and will want to win through themselves though. We played them in pre-season but I don’t think that’ll have a bearing on the game or the squads available to us. It’ll be how we approach the game mentally that makes the difference because I know that physically we are all there.”