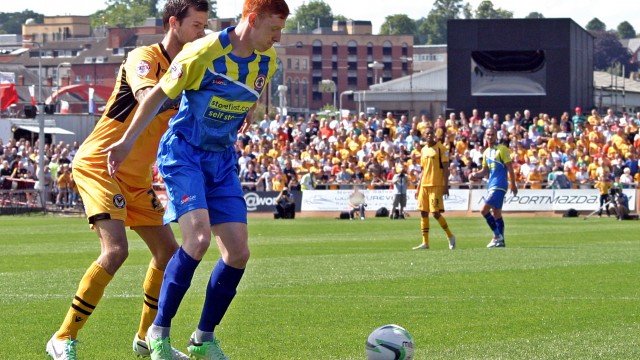 The 21-year-old caught the eye on his return to the team as the Reds led for 70 minutes at Kingsmeadow – only to be denied a first three points of the campaign by a late equaliser.

“The performance was great from the lads and I think we’re very unlucky not to get the three points,” said the Newcastle loanee. “We went down to ten men and it was a massive team effort. We knew at half time that they’d have a lot of the ball and that we’d have to defend well and we said that if we came out and defended well in the first ten minutes then there was no reason why we couldn’t win the game.

“For them to score with five minutes left is very disappointing but after going down to ten men we can be happy with a point.”

James Beattie’s side dominated the first half after Kayode Odejayi had opened the scoring and Richardson was only denied his first goal in Stanley colours by an excellent save from goalkeeper Ross Worner before he was inches from converting a Peter Murphy header.

“On another day I could have had a couple of goals,” he explained. “You just need that little bit of luck and they fly into the back of the net or get a little deflection and go in. That just doesn’t seem to be happening for us at the minute.

“In the first half with eleven men we were fantastic. Our shape was totally as we’ve been working on all week to stay solid away from home. We settled their fans down and they started to turn on their team and the red card spoiled a good first half.”

Kayode Odejayi was then sent off after clashing with Jack Midson, leaving the visitors to battle through the whole second half with ten men and only succumbing to Alan Bennett’s 86th minute header.

“I think one or two (of our players) will be cramping up on the way home and they’ll be screaming! It takes everyone to defend, you can’t do it in twos or threes, all ten were fantastic.

“I thought Marcus (Bettinelli) made some great saves, the centre backs were solid and the shape was great and I think we can really build on the performance.”