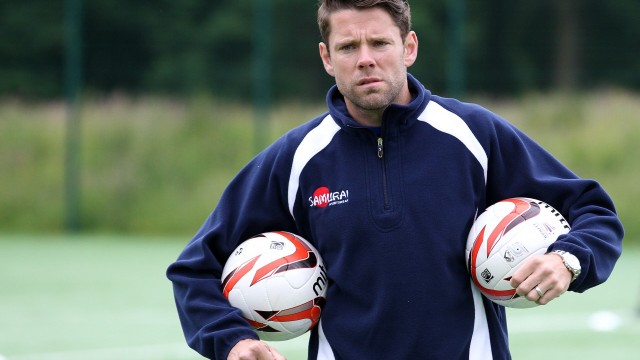 James Beattie admits he’s undecided about whether to pull his boots on again for this weekend’s game at AFC Wimbledon – but that he is tempted by a return to playing to help Stanley up the League Two table.

The Reds remain without a number of players through injury and are also affected by this weekend’s internationals and the manager is yet to make his decisions on team selection.

“Whatever I believe is best then we will do it,” he said. “We’re missing James Gray and Shay McCartan this week due to international duty and that’s obviously not ideal but we’ll put out a side on Saturday that I believe will beat Wimbledon.

“I’ve always said I won’t harp on about injuries but we have had our fair share so far. We’ve lost Lawrie Wilson and Michael Liddle, both left backs, and Lee Naylor has come in and done a great job. When we’ve got the full squad available then we’ll be able to put out the best team that we can.”

The absence of Northern Ireland duo Gray and McCartan leaves vacancies in forward areas but striker Danny Webber could return to soften the blow – but only if he’s ready.

“There’s a temptation to push somebody into the side who is maybe not quite ready but we’ll assess that as we always do,” explained Beattie. “If Danny’s ready then he’s ready. If he’s not then we’ll choose from what’s available to us and go from there.”

And what are the chances of one of those available being a former England, Southampton, Sheffield United and Everton striker?

“We haven’t decided the team yet,” reiterated Beattie, who was an unused substitute in last Friday’s defeat to Dagenham & Redbridge. “If it’s the best thing for the club and then team then I’ll get changed and if it’s not then I’ll be suited and booted.

“The decision the other night was when we were 2-0 down and I felt that it was better to give the lads with more dynamism a chance to try to change the game. We’ve been beaten by the odd goal in most of the games and when games are close and it’s 0-0 or you’re one down or whatever it is in the mind to throw me on and give us that extra attacking option.”

At the other end of the pitch the Reds have been without a substitute goalkeeper for the last two games with number one Ian Dunbavin recovering from injury.

“It’s been a decision to go with an aggressive bench,” said Beattie. “It’s a risk but in life you have to take risks and I think it’s a risk worth taking. Bavs has been unlucky. He has been training but he hasn’t been back long and I didn’t think he was fit enough to be on the bench the other night so we went with that attacking bench.”