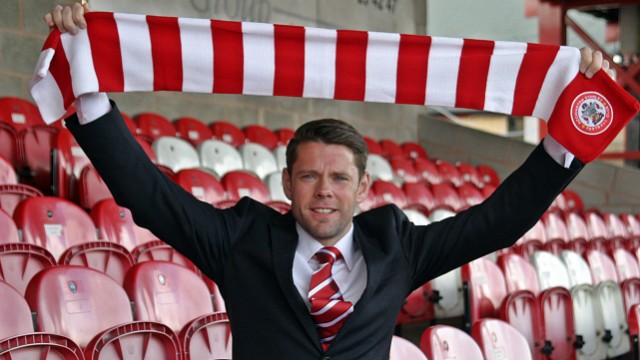 James Beattie doesn’t feel that tomorrow’s trip to Hartlepool should be billed as a must-win game – but admits that an away victory would be just what the doctor ordered for the Reds.

The Stanley manager takes his side to the north east to take on a side just a point and a place better off in the Skybet League Two table.

And despite still waiting for a first league win of the season, Beattie is in confident mood ahead of the game.

“I believe it’s too early to call it ‘must win’,” he said. “People get a little bit carried away these days when things don’t go too well. We’re only six games in and people are talking about pessimistic outcomes and I’ve got absolutely no time for those whatsoever. We’ve got to remain positive, we have a job to do, we are very professional in what we do and the results will turn.

Any game we go into we go into to win. We feel we have the personnel to win any game in this league, we went to Chesterfield who are top and gave them a good game so we go into every game knowing we do have the tools to win it. We’ve been missing that final component and hopefully we’ve got that now and we’ll be looking to add more to give us a boost.”

Since last weekend’s narrow defeat at Chesterfield Beattie has added Rotherham striker Kayode Odejayi on loan and hopes that the 31-year-old can add something in the final third to the recent encouraging performances.

“The players have been a credit,” he continued. “Over recent weeks we’ve had many plaudits and I’ve had letters written to me saying how well the players have been playing. That’s all well and good and we thank those people for their support but at the end of the day it’s about putting points on the board.

“If we’re playing well and creating chances but not converting those chances then there’s a problem. Hopefully the solution to that problem has walked through the door and will prove to be a piece in a jigsaw that isn’t yet complete.”

Colin Cooper’s side are also looking for their first three points of the campaign and Beattie admits that whoever can triumph will be given a shot in the arm.

“Winning any game is always a boost and football is all about confidence,” he explained. “The lads are honestly confident after our recent performances and that’s testament to their character. We’ve got a great team spirit and that won’t be altered by adverse results.

“The lads believe in what we are doing and I believe in them or else they wouldn’t be here. I believe that’s a good formula.

“Having said that, if we could reduce the performance level and go and get a really, really scrappy 1-0 win then I’d take that all day long!”